Whitford/St. Holmes to perform some tunes they helped make popular with Aerosmith, Nugent 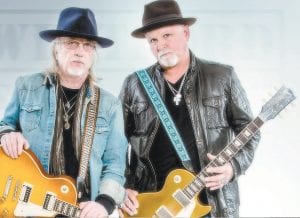 When Aerosmith guitarist Brad Whitford and former Ted Nugent Band singer Derek St. Holmes appear in Whitesburg on Sunday they will perform some of the songs each helped make famous during the rock era of the 1970s.

Fans who attend the show at Appalshop Theater will hear the Whitford/St. Holmes band perform the Aerosmith classic “Last Child” — the Whitford-penned tune that appears on the 1976 classic album Rocks — as well as “Train Kept A-Rollin’,” which Aerosmith covered with perfection on the 1974 album Get Your Wings.

Also expected to be on the playlist for Sunday night’s show — which starts at 8:30 p.m. sharp — are covers of some of the bestloved songs St. Holmes sang as the 22-year-old lead vocalist for Ted Nugent in 1975 — “Hey Baby” and “Stranglehold.”

Whitford and St. Holmes also frequently team for a cover of the Jimi Hendrix classic “Red House” along with songs they wrote together for their 1981 debut album Whitford/St. Holmes and their brand new album Reunion.

Whitford and St. Holmes are stopping in Whitesburg Sunday while on a short break from their national tour in support of Whitesnake, a band led by new Rock and Roll Hall of Fame member David Coverdale, who was inducted into the Hall this spring as a member of Deep Purple. Whitford was inducted into Rock and Roll Hall of Fame with Aerosmith in 2001.

Whitford and St. Holmes are also touring in support of Reunion, their first album in 35 years and one that has been well received since it was released June 3.

Writing for the Boston Herald, critic Bill Brotherton says Reunion “is a throwback to FM radio hard rock of the ’70’s, and it’s great.”

“Whitford’s guitar solos are splendid, taking care of business on the Bachman-Turner Overdrive/ Bad Company-like ‘Hot for You’ and the Van Halen-aping ‘Rock All Day,’” writes Brotherton.

“It’s been an unexpected pleasure,” Whitford told Billboard magazine in a recent interview. “Derek and I ended up practically being neighbors in (Nashville) Tennessee, so we just started doing what we do, just playing, and we started writing a lot of songs and it was very organic and it’s been a lot of fun. We have a real good musical connection, so it’s very easy for us to work and play together, and the songs just came.”

St. Holmes told Billboard that, “I almost forgot how cool our partnership was. It’s been, what — 34, 35 years? But it’s as easy and natural now as it was then. There was absolutely no sitting around thinking, ‘Gosh, what’s cool these days?’ We just wanted to play rock n’ roll, the stuff that we wanted to do when we played with Aerosmith and Ted Nugent.”

According to Billboard, “Whitford and St. Holmes self-produced Reunion at The Castle Studios in Franklin, Tenn., cutting basic tracks in two days and wrapping the entire nine-song set in just 12 days with bassist Chopper Anderson [who has toured extensively with Reba McEntire], keyboardist Buck Johnson and Tesla drummer Troy Lucketta.”

“We both come from bands where the fun factor is low, so that worked its way in there,” Whitford told Billboard. “In the case of Aerosmith there’s lots of frustration. It always has been and continues to be such a diffi- cult band to work with and to get things done, so a lot of [the lyrics] came from that.”

In a recent interview with The Cleveland Scene, Whitford said and St. Holmes say they share the same taste in music.

“I’ll always be a lover of hard rock and blues,” Whitford told Cleveland Scene writer John Niesel. “That’s never going to go away. That’s where this stuff comes from and when I started getting into music as a teenager, it was all about Zeppelin and Cream and Hendrix. That’s the stuff I’m drawn to. It’s amazing that classic rock is still such a strong medium.”

“We’re cut from the same cloth,” St. Holmes told Niesel. “His birthday is February 23 and mine is February 24. We’re Pisces. Sometimes, we show up and have the same colors on and it’s so wacky. I think it’s some of sort of Zodiac weirdness. We love the same kind of music and that makes it easy.”

There is no opening act for Sunday night’s show, which begins promptly at 8:30 p.m. Admission is $50. Beer, wine and soft drinks will be available. Persons wishing more information may call promoter Greg Napier at 606- 434-8648.