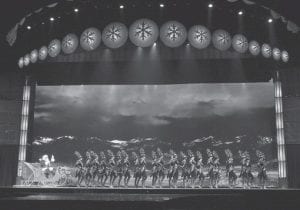 The Radio City Rockettes were photographed rehearsing in Cincinnati for the Radio City Christmas Spectacular, a 60-day tour that will include 18 sports arenas around the U.S. (AP Photo)

The Rockettes — the worldfamous precision dance troupe that has entertained audiences at New York’s Radio City Music Hall for 76 years — are bringing their flashy high kicks and precision tapping to arenas for the first time.

The special large-scale version of the “Radio City Christmas Spectacular” designed specifically for arena settings made its world premiere at Minneapolis’ Target Center on Nov. 7.

The cast and crew were in Cincinnati last week rehearsing before the whirlwind 60-day tour brings them back to the Queen City for three days (Nov. 28-30) at U.S. Bank Arena.

The leggy chorus line of Rockettes — along with Santas flying over the audience, ice skaters, live fireworks and a living Nativity scene with live camels — descends on arenas in 18 cities across the Midwest and South.

Smaller, edited versions of previous Radio City Christmas shows have toured before in a few cities, but always in theater settings, said Jonathan Hochwald, executive vice president of productions for Madison Square Garden Entertainment, which owns and operates Radio City, the Rockettes and the Christmas show. 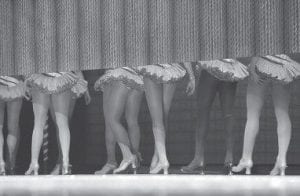 The Radio City Rockettes walked offstage in Cincinnati as they took a break from rehearsal for the Radio City Christmas Spectacular. (AP Photo)

“We wanted to duplicate what we do in New York, but in a oneof a-kind live entertainment experience, and using large-scale venues like arenas holding 7,000 to 12,000 people was the only way to do it right,” Hochwald said.

Billed as the largest, most ambitious production of the famed holiday extravaganza, the multimillion-dollar touring version replicates last year’s 75th anniversary spectacular while adding a secondary stage and special effects not possible in theater settings. The secondary stage where ice skaters entertain extends into the audience, and Santas fly overhead rather than just across the stage, providing a three-dimensional perspective not found in theaters, Hochwald said.

Moving a live show with more than 175 cast and crew members, 1,300 costumes, 10 live animals, 2,500 pounds of artificial snow, flying sequences, and special effects requires a lot of logistical planning, said Jeff Capitola, vice president of touring productions for MSG Entertainment. He said 34 trucks and 13 buses are needed to transports sets, cast and crew over 4,900 miles during the 60-day tour.

“We are traveling with our own medical team and a caterer who will provide 35,000 dinners in the next two months,” Capitola said.

MSG Entertainment turned to Tait Towers Inc., which has designed staging for rock tours by U2, the Rolling Stones and Madonna, to build the complex stage set.

“We had to create a structure that can be dismantled in four hours,” said James Fairorth, president of Tait Towers. “I think this rivals any spectacular that U2 or the Rolling Stones have put on.”

Backstage is a beehive of activity with Rockettes required to change costumes eight times during the show — sometimes in as little as 78 seconds.

Onstage, traditional favorites such as the precision tap routine with Rockettes dressed as toy soldiers in crisp red and white military uniforms topped with tall black hats remain an essential part of the spectacular.

Rockette Marcella Seymour sat at the Cincinnati rehearsals watching her fellow dancers perform the toy soldier routine that she says she never tires of watching or performing.

“I was 5 when my father took me to see my first Christmas show at Radio City, and my eyes lit up when I saw those beautiful ladies performing,” said Seymour, who said that was when she decided to be a Rockette. “I think this new show will just blow the audience away.”

The arena tour is exciting for the Rockettes. Jaime Windrow has previously performed only in the New York show but asked to be part of the new tour.

“It’s a chance to be part of history with this brand-new, huge production,” Windrow said.

Other U.S. and Canadian cities could be added over the next two years, with an international tour a possibility, Hochwald said.