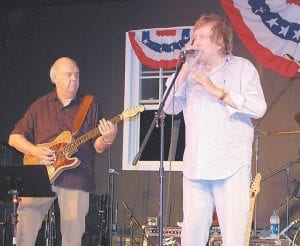 Rock and country musician Billy Joe Royal, right, performed his Sixties’ hit “Down in the Boondocks” and other songs at a free Fourth of July concert and fireworks show sponsored by the City of Whitesburg. The event was held at River Park, near the Whitesburg hospital. County music band The Kentucky Headhunters are scheduled to headline a similar celebration on Labor Day.