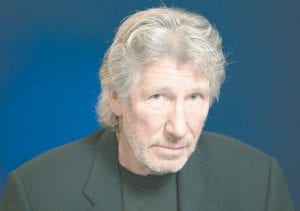 Roger Waters posed for this photo in Los Angeles on April 7. The former Pink Floyd bassist and songwriter is celebrating the 30th anniversary of his former band’s legendary album, “The Wall,” with a tour. (AP Photo)

It’s been 30 years, but Pink Floyd’s “The Wall” still means a great deal in the rock world — and to its co-creator Roger Waters.

So to commemorate the groundbreaking album’s anniversary, Waters plans a tour this fall of the music from the concept album, with new staging that will bring the story — loosely inspired by his life — to a new generation.

“In the 30-odd years since I first performed this piece, it’s taken on some new meanings for me,” Waters, co-founder, bassist and main lyricist for Pink Floyd, said in an interview last week.

“Thirty years ago when I was kind of an angry and not very young lad, I found myself driven into defensive positions because I was scared of stuff , and I’ve come to realize that in that personal story, maybe somewhere hidden in there exists an allegory for more general and universal themes, political and social themes,” he said. “It’s really for that reason that I decided that I’d try and create a new performance of this piece using a lot of the same things that we did all those years ago.”

But Waters said he won’t just be dusting off the show that the now-defunct Pink Floyd performed decades ago. In fact, Waters said part of the excitement surrounding his new staging of “The Wall” involves new technology that allows him to do things he could only dream about in the 1980s and ‘90s.

“Projection systems now are completely diff erent from what they were then, which means that I would be able to project over the entire 250-foot expanse of the wall … which we couldn’t do in days,” he said.

Though the tour promises plenty of grand theatrics, more important to Waters is the legendary album’s political and social commentary, which he believes is still relative.

“When we did it then, we were after the end of the Vietnam War, and we’re right now in the middle of wars in Iraq and Afghanistan, so there’s a very powerful anti-war message in ‘The Wall.’ There was then and there still is now,” he said.

Waters plans a segment in the show that will pay tribute to soldiers who lost their lives, not only in the recent wars, but also in other conflicts.

The U.S. tour will kick off Sept. 15 in Toronto and end Dec. 15 in Anaheim, Calif. It will also head to Europe. (The closest the tour comes to eastern Kentucky is Columbus, Ohio, at the Schottenstein Center on Oct. 22. The tour also stops in Pittsburgh on Sept. 26, and in Cleveland on Sept. 28. Waters will also be in Atlanta on Nov. 18.)

For Waters, the concerts will likely mark the end of his performing days.

“I’m not as young as I used to be. I’m not like B.B. King, or Muddy Waters,” the 66-year-old said. “My friend Eric Clapton … he’ll be playing guitar and he’ll be on stage ‘til the day he dies, because that’s what he does.”

“I’m not a great vocalist or a great instrumentalist or whatever, but I still have the fire in my belly, and I have something to say,” he continued. “I have a swan song in me and I think this will probably be it.”