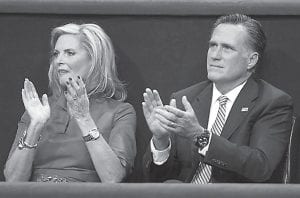 Former Massachusetts Gov. Mitt Romney swept to the Republican presidential nomination Tuesday night, praised lovingly by his wife from their national convention stage as the “man America needs” and cheered by delegates eager to propel him into the fall campaign against President Barack Obama.

The hall erupted in cheers when Romney strolled on stage and shared a hug and kiss with his wife of more than 40 years.

“It’s the moms who always have to work harder, to make everything right,” she said. And she vouched firmly for her husband, who lags behind Obama in surveys among women voters: “You can trust Mitt. He loves America.”

Earlier, the Romneys watched on television at a hotel suite across the street from the convention hall as delegates sealed his hardwon victories in the primaries and caucuses of last winter. They ended the evening together in a VIP box just above the convention floor.

To send Romney and ticketmate Paul Ryan into the fall campaign, the convention quickly approved a conservative platform that calls for tax cuts — not government spending — to stimulate the economy at a time of sluggish growth and 8.3 percent unemployment.

Republican mockery of Obama began almost instantly from the podium at a convention postponed once and dogged still by Hurricane Isaac. The Democratic president has “never run a company. He hasn’t even run a garage sale or seen the inside of a lemonade stand,” declared Reince Priebus, chairman of the Republican Party.

More than eight hours in length, the session inside the Republicans’ redwhite and-blue-themed convention hall passed up no opportunity to broaden Romney’s appeal. Speakers included Hispanic candidates for office; former Rep. Artur Davis, a one-time Democrat and member of the Congressional Black Caucus; businessmen and women and former Sen. Rick Santorum of Pennsylvania, Romney’s most persistent, conservative nemesis in the nominating campaign.

“Leadership matters,” declared New Jersey Gov. Chris Christie, keynote speaker and not coincidentally a Republican from a majority-Democratic state. “It’s time to end this era of absentee leadership in the Oval Office and send real leaders to the White House.”

Mrs. Romney’s appearance was the highlight of the night, and it turned the proceedings into something of a his-and-hers convention.

“I read somewhere that Mitt and I have a “storybook marriage. Well, in the storybooks I read, there were never long, long, rainy winter afternoons in a house with five boys screaming at once,” she said.

“A storybook marriage? No, not at all. What Mitt Romney and I have is a real marriage,” she added in an appearance meant to cast her multimillionairebusinessman turned politician in a softer, more likable light.

While there was no doubt about Romney’s command over the convention, the residue of a heated campaign for the nomination was evident inside the hall.

Texas Rep. Ron Paul, who never won a primary or caucus, drew several dozen delegate votes. Earlier, his supporters chanted and booed after the convention adopted rules they opposed, but were powerless to block, to prevent those votes from being officially registered.

Opinion polls made the race a close one as the Republicans’ days of pageantry and speechmaking began in earnest, and the man tapped to deliver the keynote address set the stakes.

“Conventions are always huge for a challenger, because they’re the ones introducing themselves” to the voters, said New Jersey Gov. Chris Christie.

Convention planners squeezed two days of speeches and other convention business into one after scrapping Monday’s scheduled opener because of fears that Isaac would make a direct hit on the Florida Gulf Coast.

That threat fizzled, but it was instantly replaced by another — that Republicans would wind up holding a political celebration at the same time the storm turned its fury on New Orleans, devastated almost exactly seven years ago by Hurricane Katrina.

Romney’s convention planners said they were in frequent contact with weather forecasters, but they declined to discuss what contingency plans, if any, they had to accelerate plans for him to deliver a formal acceptance speech Thursday night.

“This is obviously the biggest speech of my life,” Mrs. Romney said as she visited the custom-made podium to prepare for her remarks.

Ratification of a party platform was prelude to Romney’s nomination, a document more conservative on abortion than the candidate.

On economic matters, it backs extension of the tax cuts enacted in 2001 and 2003 and due to expire at year’s end, without exception. It also calls for an additional 20 percent reduction in income tax brackets that Romney favors.

In a time of 8.3 percent unemployment and the slowest economic recovery in the post-World War II era, that went to the crux of the campaign for the White House.

By contrast, Obama wants to allow existing tax cuts to expire on upper income taxpayers, and has criticized Romney’s overall economic plans as a boon to millionaires that would raise taxes on the middle class.

The GOP platform also pledges that a Republicancontrolled Congress will repeal, and Romney will sign, legislation to repeal the health care legislation Obama won from a Democratic controlled Congress. So, too, for the measure passed to regulate Wall Street in the wake of the 2008 economic collapse.

On abortion, the platform says, “ The unborn child has a fundamental individual right to life which cannot be infringed.”

Romney opposes abortions, except in cases of rape, incest, or when “the health and life of the mother” are at stake, he said in a convention week interview.

Obama, who accepts renomination at the Democratic National Convention in Charlotte, N.C., next week, campaigned in Iowa Tuesday as he set out on a tour of college campuses in battleground states in hopes of boosting voter registration among college students.

Before departing the White House, he made a point of appearing before reporters to announce the government’s latest steps to help those in the way of Isaac. He signed a declaration of emergency for Mississippi and ordered federal aid to supplement state and local storm response efforts in the state.

His surrogates did their best to counter Romney and the Republicans.

Los Angeles Mayor Antonio Villaraigosa, dismissing GOP attempts to woo Hispanic voters, said, “You can’t just trot out a brown face or a Spanish surname and expect people are going to vote for your party or your candidate.” He added, “This is a party with a platform that calls for the selfdeportation of 11 million people.”

Hispanics strongly favor Obama, according to public polls, and Romney and his party have been seeking to win a bigger share of their votes by emphasizing proposals to fix the economy rather than ease their positions on immigration.

Female voters, too, prefer the president over his challenger.