Romney, Obama campaigns fight over who supports coal the most 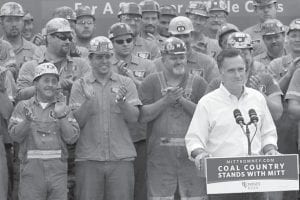 Republican presidential candidate Mitt Romney, former governor of Massachusetts, spoke during a campaign event August 14 at the American Energy Corporation in Beallsville, Ohio. The Obama campaign says Romney has opposed the coal industry in the past, once saying that a coal-fired plant “kills people.” (AP Photo)

Campaigning literally on top of a coal mine with dozens of soot-covered miners behind him, Mitt Romney pledged energy independence after eight years of a Romney presidency.

The presumptive Republican presidential nominee used the public event in Ohio on August 14 – attended by about 1,500, mostly coal miners and their families at the Century Mine in eastern Ohio – to draw contrasts with President Barack Obama on coal and overall energy policies.

“If you believe the whole answer for our energy needs is wind and solar, then say that.”

As expected, Romney’s message was countered by a stiff rebuke from the Obama campaign, which blasted out footage and citations of statements and policies Romney supported as governor of Massachusetts that would seem to put him at odds with the coal industry.

Also, the Century Mine is owned by a subsidiary of Murray Energy Corp. — a company with past environmental violations that Democrats and environmentalists use as evidence to support stiffer regulations.

Ohio Valley Coal and parent company, Murray Energy, were fined more than $1 million and required to spend $6 million to build a new slurry pipeline in Belmont County as part of a plea agreement for water pollution violations in 2008 and 2010.

The president supports limits on carbon-dioxide emissions from coal-fired power plants to help curb climate change, and the EPA under Obama also has enacted rules to limit toxic air pollution and mercury from coalfi red power plants — all policies Republicans and coal-industry leaders say are harmful.

Robert Murray, founder of Murray Energy and a financial donor for mostly Republican candidates, has blamed layoffs at some of his mines on Obama’s policies. Murray attended Romney’s event but didn’t speak – Romney said Murray is a “great boss, he runs a great operation here.”

U.S. Mine Health and Safety Administration statistics show that Ohio’s mining industry has added about 300 jobs and coal production is up 7 percent during Obama’s presidency. Additionally, the president has funneled $5 billion into “clean coal technology” – investments his campaign says are proof that he supports clean coal as a component of his energy strategy.

“This record stands in stark contrast to Mitt Romney’s,” said Lis Smith, an Obama campaign spokeswoman. “As governor of Massachusetts, Romney spoke out against coal jobs, saying that a coal-fired plant ‘kills people.’ This is just another issue where the American people can’t trust Mitt Romney to be honest with them.”

The Romney campaign views Ohio’s coal mining counties as areas of opportunity. A map at Romney’s Ohio campaign headquarters on Dublin Road has 36 eastern and southeastern Ohio counties shaded in as “Coal Country,” stretching from the far south in Scioto County on the Ohio River to Lake County on Lake Erie.

“The people there are very upset about the president’s polices as they relate to coal,” said Scott Jennings, Romney’s Ohio campaign director.

Nodding at the map during an Aug. 8 visit to Columbus, Rich Beeson, Romney’s national political director, said, “When you look at that map, coal is going to be a big issue to the people of Ohio.”

He based that observation, in part, on Obama’s poor showing in this year’s West Virginia Democratic primary election “because of the coal issue.”

In interviews, several coal miners here were aware of Romney’s past with coal, but still said they were supporting him.

“This is our livelihood, this is how we feed our families,” said Joedon Nippert, a Century Mine worker. “When it comes to coal being your job, it’s hard to look beyond” Obama’s policies on coal.

Gordon Gump, an Ohio Coal Valley Company worker from Cameron, W.Va., was among the hundreds standing in line outside the Century mine hours before Romney’s event.

Asked about Romney’s 2003 comment, Gump said “15 years ago I probably said some things I didn’t mean either.”

“Obama and Biden, all along they’ve said there’s no room for coal,” Gump said. “If you make your living off of coal, of course you’re gonna vote on who supports it.”

Gary Williams, of Lisbon, Ohio added: “(Romney) probably changed his stance because Ohio’s a key state and he’s going to court the coal people as much as possible.”