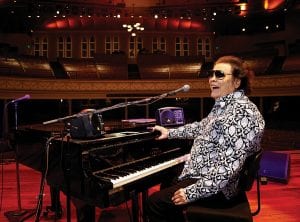 Ronnie Milsap poses for a photo on the stage of The Ryman Auditorium in Nashville, Tenn. Milsap’s new album, “Ronnie Milsap: The Duets,” is out now. (Photo by Donn Jones/Invision/AP)

Country soul icon Ronnie Milsap is a bit of a studio geek, and he thinks a lot about music technology and recording equipment. So it makes sense that he spent a long time getting 13 other singers and bands into the studio to record duets with him for a new album, “Ronnie Milsap: The Duets,” which was released January 18, just two days after his 76th birthday.

He says it took him a few years to finish the album because of scheduling, but he’s amassed an impressive list of partners, from Dolly Parton, Willie Nelson, ZZ Top’s Billy Gibbons, Kacey Musgraves and many more.

“The whole trick was trying to find a time that Luke Bryan could come in or George Strait could come in,” Milsap said.

Born in North Carolina, Milsap was a wunderkind at musical instrumentation, learning gospel, country and pop music from radio and classical techniques from the State School for the Blind in Raleigh.

Early on in his career, he played piano on Elvis Presley records such as “Kentucky Rain,” in which the King of Rock ‘n’ Roll implored him for “more thunder on the piano, Milsap!”

After moving to Nashville, he bought a Music Row studio from Roy Orbison, renovating it and turning it into a hit factory, starting with his 1979 hit “Nobody Likes Sad Songs” through his major hits like “Stranger in My House.” He had the recording console equipped with a Braille label and kept it until 1995.

The studio known as Ronnie’s Place is still in use today by record label Black River Entertainment and that was where Milsap returned to record the new album. The six-time Grammy winner said he tried as much as possible to be in the studio with his duet partners when they were recording, rather than recording at separate times.

Little Big Town added their pristine harmonies to his iconic hit “Lost in the Fifties Tonight,” while Strait was given the lead on “Houston Solution.”

“I gave him the first line, ‘I got some friends down in Houston, who know me quite well,’” Milsap said. “I thought George ought to have it. George is from Texas.”

Montgomery said recording with Milsap was a bucket list item that he’s glad they got to check off before Gentry’s death in a helicopter crash in 2017.

“He is the king of soul, I think,” said Montgomery. “In country, nobody sings with more heart. ‘Stranger in My House’ was the first time I heard rock ‘n’ roll guitars on a country song.”

Even Milsap has adapted to new audio technology, and he says while he still listens to radio, he loves his Amazon smart speaker.

“’Alexa, play ‘A Legend in My Time’ by Ronnie Milsap’ and right there it is,” Milsap demonstrated in his house. “It’s not the same model anymore to sell records.”

Milsap kicked off his new tour Wednesday in Nashville, where he was joined by Little Big Town, and he’ll visit 21 cities through May. Milsap joked that the reason he did a duets project was because he couldn’t put out anymore greatest hits albums since his longtime label RCA had already put out three volumes.

“Most of the artists that record a duets project, that’s the last thing they ever do,” Milsap said. “I don’t want that to be true.”