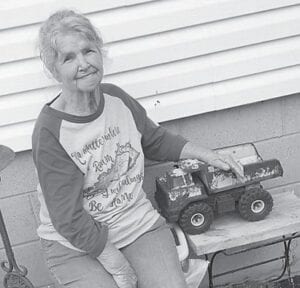 “This is what I looks like when I have an exciting yet tiring day when I turn 75,” says Rose Ballard. Photo by her daughter, Anna Nottingham.

Hello again, everyone! Are you ready for summer? That is if cold weather ever quits interfering so it will stay warm then quits turning so cold you need to quit switching from air to heat.

A couple of days ago the air felt more like an early fall day to me than spring. It is downright cold this morning; you will need a jacket.

Once again I will start by asking how are things in your little corner of the world. I hope everyone is safe as we are living in perilous times at the present.

As if this coronavirus pandemic or whatever it is called isn’t enough as having you quarantined, sheltered in place, stay at home rule. I prefer to my situation, I am in time out.

It has been almost two months since I’ve shopped for food. My son does most of the shopping. I am glad he pays for the groceries as he gets extra that I wouldn’t buy.

I did break out of time out long enough to go find flowers to put in the yard as Keith has dug around every tree, post and any place he can find a spot. I am afraid to stand still too long as he will have a circle spaded up around me. I must say the yard hasn’t looked this pretty in several years. 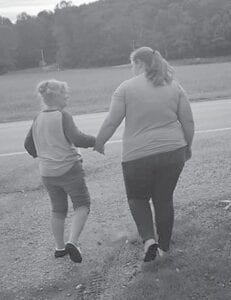 Rose Ballard’s granddaughter Jessica Nottingham holds her hand to steady her as they were walking through the yard on her 75th birthday.

This past week has been sort of an unusual week for me personally, as it marked a milestone for me. Wednesday was my birthday, which meant I had to get the stickers renewed on two cars. The local license branch opened on Tuesday, so I figured I would wait until Wednesday morning. I had almost a two-hour wait to finally get my stickers.

I came outside to find Vickie Power waiting. I needed a couple more plants so we decided to check out Walmart in Aurora, Ind., which was a useless trip.

When I came home I found my son Keith starting a task that I was very uncomfortable with. Several years ago the large picture window in his room had gotten a spot in the top, either a rock from the lawnmower or it had been shot. Either way a crack had developed from the top of the frame to the bottom. 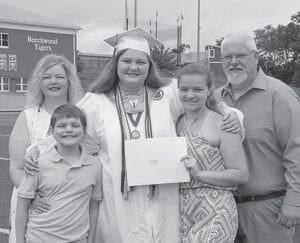 When Keith is determined to do something, it is difficult to try to talk him out of it. I kept asking did he need any help, the answer was a stern “No, I am alright.”

I finally gave up, then a little later I heard the sound of glass crashing. I barely remember going through the house, afraid of what I was going to find when I opened the back door.

Keith was covered with glass on his shoulders, as he was working without a shirt on, with a million pieces of shattered glass all around him, on the deck and ground and I couldn’t get to him because I was barefoot.

Keith kept saying, “I’m alright,” as he walked up the steps, saying he was getting in the shower to get the glass off him. There was no way he could get in the shower as the glass would have cut him.mHe suggested I use the vacuum cleaner, which I did to remove the large and shaves of glass from his hair and body.

After he was able to get in the shower, as I stood to survey what had just happened, I literally thought my heart was going to stop beating as it started to beat so slow. No one had better ever say there isn’t a God, as I witnessed a miracle on my 75th birthday.

God spared my son’s life, as Keith had removed the large pane of glass then balanced it on the top railing of the deck and top of the ladder. Somehow the pane of glass tipped forward. Keith saw it falling towards him, managed to duck close to the house so when the glass broke it shattered, covering him. As I am recalling the incident, tears are filling my eyes.

I am glad it is in the back of the house, as for the next couple of weeks there’s a window with a huge piece of wood where glass used to be.

For the first time in several years my children decide to come for my birthday. After the incident with Keith and the window that was the last thing that I wanted to do was celebrate my birthday. My daughter Angie and Bennie Wiederhold came bringing me several gifts and cards, and my granddaughter Jodi stopped by with the most beautiful coral rose bouquet.

Angie took Jodi for a ride in her new car, so I spent a little time with 13-year-old Bennie.

Jodi, Angie, and Bennie had just pulled away when my daughter Anna, along with Scott, Jessica, and Kyle, came bringing gifts. Keith was cutting the board for the window, so Scott pitched in and helped Keith with placing it in the window frame.

My daughter Kay Gray had called earlier to wish me happy birthday. Kay had a doctor’s appointment and a dozen things going so she didn’t make it down.

Kay got for me a two-year roadside assistance from Triple AAA.

As Anna and the family were getting ready to leave, I received the biggest surprise of all. Ann Calihan called to say that her daughter Sue Wagner, who recently had a liver transplant, was bringing Ann down to see my yard and flowers.

What Ann didn’t say is they were bringing a most beautiful huge pot of flowers that somehow found room at my back deck.

There’s an ironic side to Ann Calihan’s visit. Ann held me in her arms when I was about eight or nine months old, then 75 years later, she brings me flowers, spending a short time with me walking through the yard. Oh yes, the day ended in a special way for me.

Thanks to everyone for the birthday wishes on Facebook, the cards in the mail, and the gifts.

Several years ago my ex-husband said I was like an ostrich, that I stuck my head in the sand when it came to things outside of taking care of my children. He was referring to the gas shortage. I didn’t drive that much then as I had three babies before I was 20, so I had my hands full.

This past week that remark came back to smack me in the face, as I had spent most of the day outside working in the yard, and when I came in the house as usual I turned the television on to Hallmark Channel.

At 10 p.m. I switched to our local news to see that I-75 in Cincinnati had been closed for four hours due to protesters. At the present time the rioting has continued for several nights with several arrests and damage to several buildings in Cincinnati, along with so much destruction in several cities and states.

Destroying businesses is taking away what people have worked so hard to build. There are places that have closed due to the coronavirus, and people are out of work. Now this happening. There’s rioting with so much destruction, with violence and fires everywhere.

What I would like to know is how is this rioting helping to bring the man who was killed by a policeman back to life?

June 1 makes one year since I had the accident at Jackson. This is day that will forever be embedded in my mind, as it has been a life altering for me. Not only has it caused me physical pain, it has hurt me emotionally.

At the present time my ankle is swollen like you have pumped air in a balloon. I try not to be bitter, which is very difficult as someone had their big nose stuck in a cell phone.

By now she is probably holding her baby, since she was supposedly pregnant. I wonder when she looks at the child if she ever thinks what her carelessness could have cost.

Again, I am thankful I am able to walk and drive, but I may never be able to dance again. Dancing was as important to me as breathing, as it relieved stress. People take drugs, or use some sort of medication or alcohol to solve problems or whatever reason. I simply need music and a little dancing to take away anything that is bothering me.

If Gov. Beshear doesn’t open Carcassonne and Campbell Branch Community Centers I am going to stage a one-person protest.

A special thanks to Mike and Marcia Caudill and CANE Kitchen for helping get food to those who need it.

Hello to Les and Pat Wagner and those who are reading this column.

There was a minor accident concerning a fire truck, with John Ison a passenger. I am glad that Brain Hall and John Ison weren’t seriously injured.

Johnny and Ann Calihan are doing fairly well. Johnny is trying to raise a little garden.

I wish someone in this area that I know had a lettuce bed, since you can’t find lettuce seed anywhere. I think I am going to take a drive on a country road to see if anyone has a garden planted. If there’s a lettuce bed I may just stop to see if I can buy a small bit of lettuce.

Larry Roark, it is a good thing I can’t get to the mountains. I would be paying you a visit.

I would like to know who do I get in touch with to see if the road up to Coots Cemetery on top of big Branch Mountain can be fixed. It is a shame and disgrace that it is in such bad condition. You can’t get to the graves. I know of two veterans that are buried there, my dad and Steven Ray Gibson.

I remember for years there was always a group going to hold a ceremony at the cemetery. When my brother Richie Hall was alive he would get in touch with Danny Webb and fuss until Danny got someone to grade the road.

I guess I am going to have to get on the phone and see what can be done. I just don’t know where to start.

Once again I have a very few books, the Beauty of a Rose available for $15, and $6 postage.