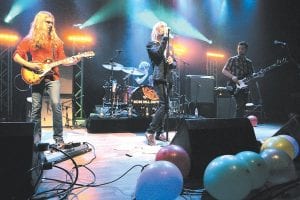 ROSE HILL DRIVE of Boulder, Colo., will perform Friday at Summit City in Whitesburg. Admission is $12.

Except for one gig opening for Jane’s Addiction on New Year’s Eve 2009 and two special New Year’s Day 2011 shows when they performed the White Stripes’ Elephant album in its entirety, the Boulder-based rock and roll band had been pretty much in hibernation before hitting the road with Stone Temple Pilots.

Rose Hill Drive has come out of the hiatus with a vengeance, however, debuting the addition of a new member, bass player Jimmy Stofer, and rehearsing and performing new material that will appear on the follow-up to its 2008 sophomore release, Moon is the New Earth.

Rose Hill Drive formed in 2003, when Daniel Sproul, his brother Jacob and childhood friend Nate Barnes began practicing in the basement of the house on Rose Hill Drive in Boulder that the Sproul brothers grew up in. Since then, they’ve released two albums, several EPs, and developed a worldwide fan base.

In the ensuing months after than band went on break in 2009, Jacob switched from bass to guitar, bassist Stofer came on board, and the band began writing new material.

Rose Hill Drive’s raw, emotive rock has earned the group high praises from both critics and fellow musicians alike. The band has opened for Wilco, The Black Crowes, Queens Of The Stone Age, Van Halen, Aerosmith and The Who, among others. Rose Hill Drive has also performed at Bonnaroo, Red Rocks, Austin City Limits, Hyde Park Calling and the Warped Tour.

“If this doesn’t make you want to pick up a Les Paul, you have no soul,” Guitarist magazine says about the band.

After performing in Whitesburg on Friday and in Asheville, N.C., at Stella Blue on Saturday, Rose Hill Drive will return to the road to support Stone Temple Pilots for four more shows through May 7.

Jacob Sproul told the Vail Daily in Colorado earlier this month that performing with Stone Temple Pilots is a dream come true for him.

“They’re definitely one of my biggest influences,” Sproul told the paper. “Just watching that band go from the grunge thing, which was really cool, to a very melodic — I would say Bowie-esque-type of sound — was very inspirational. The way they blended really hard rock with really eclectic melodies was amazing.”

Jacob Sproul also told the Vail Daily the band’s third album will have a more modern sound than its first two, which have often been compared to works by Sixties’ power trio Cream.

“The new record is a little different from what we’ve produced in the past,” Sproul said. “It’s still pretty heavy guitars, still a lot of emphasis on guitar solos and groove. But I would say, to me, it’s quite a bit more modern — combining more influences.”