Roseanne Cash is out with yet another great new recording 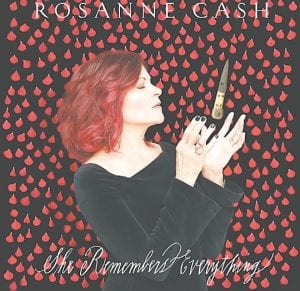 This cover image released by Blue Note shows “She Remembers Everything,” a release by Rosanne Cash. (Blue Note /AP)

Rosanne Cash brings in a fair share of collaborators on her latest album, both for songwriting and singing. T Bone Burnett, Elvis Costello, Kris Kristofferson, Sam Phillips, Lera Lynn and Colin Meloy of the Decemberists all make their presence felt.

There’s no mistaking whose show it is. “She Remembers Everything” is the sort of lovely, literate work we’ve come to expect from Cash for more than 30 years. Her last three albums have largely looked back, at musical and family history, and this is a return to a more personal songwriting style.

The project was bicoastal for Cash, who recorded half at home in New York with husband John Leventhal, her usual producer, and half in Oregon with producer Tucker Martine. Leventhal’s production can often seem too mannered, so a listener appreciates the kick of someone new. Truth is, there’s more consistency than one would expect.

In fact, the best song here (“Not Many Miles to Go”), produced by Martine, is a love song to Leventhal. As the title suggests, it’s about a couple that knows it has more days behind them than ahead. Yet it’s celebratory, not morbid, and rocks hard.

Other highlights include “8 Gods of Harlem,” another team effort with Costello and Kristofferson, two co-writing efforts with Burnett done originally for HBO’s “True Detective,” most particularly the album-opening “The Only Thing Worth Fighting For,” and the title cut, done with Phillips.

The 2000s haven’t been easy for Cash, who lost her famous father, her mother and stepmother, underwent brain surgery and wondered if she’d ever sing again after getting polyps on her vocal cords. It’s a blessing she came out of it with her abilities and ambition intact.