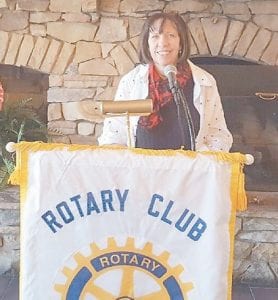 Appalshop employees Elizabeth Barret, Lacy Hale and Caroline Rubens recently talked with Rotary Club of Whitesburg members about the new creative placemaking project in Jenkins. The project, entitled “A City Built on Coal: Jenkins, Kentucky”, is funded by the National Endowment for the Arts and other sources.

The goal of the project is to work with the citizens of Jenkins to build the city’s cultural and civic life through large-scale participatory arts projects that bring together old and young, past and future, art and economics. The project will include two community designed murals on the past, future, and creative life of Jenkins, to be painted on the wall of City Hall and the old railroad bridge near the Little Shepherd Theater.

A series of large-scale photographic banners with images from the Appalshop Archive and from photography workshops with students from Jenkins Middle High School will be part of the project. A computer app containing a mediarich walking/driving tour of Jenkins and featuring voices of many generations of Jenkins residents will be available. All of these projects are currently in production and will be finished within the next year.