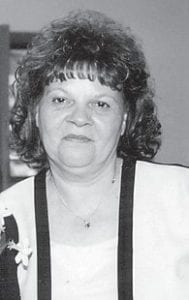 Funeral services for Wilma Jo Sexton, 64, will be held today, March 16, at Everidge Funeral Home in Whitesburg. Burial will be in Green Acres Cemetery at Ermine

Born in Letcher County to the late Granville Caudill and Nannie Bowling Caudill, she was the widow of Burnis Sexton. She died March 13 at Whitesburg Appalachian Regional Hospital.

She was a sister of the late Midge Key, Eugene Caudill, Truman Caudill, and Granville Caudill Jr.