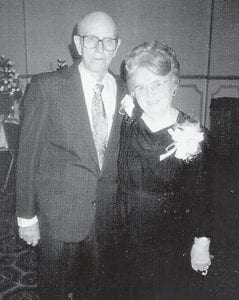 COMMUNITY LEADERS – Ruby and Clifton Caudill were married in 1933. They served as leaders in the Carcassonne community for many years.

What can I say about my grandmother that could possibly do her justice? Grandma Ruby and Grandpa Clifton have been two of the driving forces in my life that have shaped me into the person I am today. I can only hope that my life can enrich someone else’s as they have mine.

Ruby Haynes Caudill was born on June 13, 1917 to William and Katherine Campbell Haynes at Bull Creek, Kentucky. She was the second of 10 children. Ruby grew up on Bull Creek and attended the Upper Bull Creek and the Carcassonne School where she met the love of her life and her future husband.

Clifton and Ruby were involved in many things over the course of their lives together. Ruby was the postmaster at Carcassonne for 25 years. She retired December 26, 1980.

Clifton and Ruby were two of the original cast members in the outdoor drama “The Little Shepherd of Kingdom Come” from 1972 through 1980. Ruby was a square dancer, a Southern belle, Mammy Turner and Mrs. Dean over the course of the years. Also, she operated the crafts shop at the drama. Clifton was a square dancer and he played the part of Nathan Cherry for six years. Also, he operated the concession stand for a few years. Clifton and Ruby served as producers of the drama for three years. Also, they never missed a performance in nine years.

In 1990, Clifton and Ruby were recognized by the Kentucky House of Representatives and the Commonwealth of Kentucky for their dedication to the Carcassonne Community Center. Also, at the same time they received the Kentucky Colonels Award.

to the Carcassonne community. That same year, they received the Private Citizen Award for Letcher County from Southeast Community College in Whitesburg.

Ruby cut out her first dress without a pattern when she was 15 years old. She has always made her own clothes and clothes for her family. Ruby said that she remembers learning to tack and to quilt from her mother before she got married. After she got married, Ruby made quilts for her family out of necessity.

Ruby has made all of her children a hand-crafted quilt and she is now working on quilts for her grandchildren. Also, she has made baby blankets for all of her great-grandchildren and greatgreat grandchildren. Ruby makes a quilt every winter. When I asked Ruby what was her favorite quilt pattern she said, “I love them all”.

Grandma Ruby loves to sew. She has made numerous bonnets, dresses and aprons for individuals for the Mountain Heritage festival and other events in the county. Also, she made some of the costumes for the Little Shepherd of Kingdom Come Outdoor Drama. She made some patchwork skirts and vests that were sold in New York City that were featured in a magazine article. Grandma Ruby has made everything from rag dolls for all of her grandchildren to shirts for her son to wear to college.

Ruby first began demonstrating and attending craft fairs at Alice Lloyd College’s “Our Appalachia Day”. She sold everything from stuffed animals to bonnets. Verna Mae Slone, a noted local author and artisan from Knott County, told Ruby that she never knew her real name for years and referred to her as the Bonnet Lady. Ruby has demonstrated and attended numerous craft fairs such as the May Day celebration at the Hindman Settlement School, craft fairs at local libraries, the Blackey-Elk Creek-Carcassonne Festival, the Blackey Day festival and many others.

Ruby has belonged to and had her crafts displayed at several craft organizations such as the Poor Fork Arts and Crafts Guild, the Marie Stewart Crafts Shop, the Pine-Mountain Letcher County Crafts Co-op and Pioneer Village.

Clifton and Ruby were married for 65 years when Grandpa passed away on December 6, 1999. On the day he passed away, Grandpa told Grandma that she was more beautiful than ever.

Ruby enjoys quilting, crocheting, rug hooking, embroidery, sewing, gardening, square dancing, having family visit and having the ladies from the Carcassonne Needlecraft Club come to her house at Christmas for dinner and a gift exchange.

Grandma Ruby will be 90 years old on June 13. Ruby lives at Carcassonne and she still raises a garden, cans, quilts at home and with the Carcassonne Needlecraft club on Wednesday mornings, serves as the treasurer for the Carcassonne Community Center, sews, and serves as a constant inspiration to all of those around her.