Rumors about vaccinations starting to cause much harm 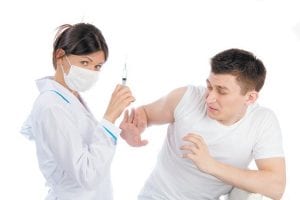 INTERNET RUMORS NOT ALWAYS HARMLESS — False tales circulating on the Internet have caused many in the U.S. to fear vaccinations, leading to the return of diseases such as measles and whooping cough and causing the preventable deaths of children.

Urban legends are ubiquitous these days, thanks in no small part to the Internet. There’s even an Internet website, Snopes.com, dedicated to unmasking them.

There’s the one about people dying of a combination of shrimp and vitamin C that is claimed to produce arsenic. There’s the one calling for bread-free zones in schools based on such ridiculous statistics as: 90 percent of violent crimes are committed within 24 hours of eating bread. And there’s the one about the energy drink containing a banned Vietnam-era, government made compound that causes brain tumors.

All of these tales have been widely circulated on the Internet and all are utterly false. In many cases the harm done by such urban legends is minimal, and they are a source of amusement for those who are well-read and maintain a healthy dose of skepticism.

But such myths are not always harmless. A case in point: a recent story in the Paducah Sun [a newspaper in western Kentucky] about increasing numbers of local parents not vaccinating their children against serious childhood diseases because of discredited claims that childhood vaccinations can cause autism.

Dr. David Schell, a Paducah pediatrician who has been in practice for 31 years, says after years of parents routinely giving their children the recommended childhood vaccinations for diseases such as measles and pertussis (whooping cough) he is starting to see increasing numbers of parents who delay or opt out of the vaccinations.

It reflects a national trend, driven in large part by the Internet rumor of a vaccination-autism link. That has resulted in recent outbreaks of childhood diseases long thought eradicated.

Measles was considered wiped out in the United States in 2000. This year there have been 539 cases reported in 20 states, including an Ohio outbreak of 368 cases that led to 10 hospitalizations. Pertussis has become even more widespread, including an epidemic in California. That state recorded more than 4,500 cases including three infant deaths this year.

That is a bitter irony — that parents who may have avoided vaccinations due to a false rumor made decisions that led in at least three cases to preventable deaths of children.

No outbreaks of measles or pertussis have been reported in the Paducah region so far, but medical providers say that if the trend continues, it may just be a matter of time.

The vaccination rumor has its roots in a 1998 research paper that claimed to document a link between the MMR (measles, mumps and rubella) vaccine and autism. The paper was later retracted by 10 of the 12 researchers who authored it after it was learned that the lead author, British researcher Andrew Wakefield, faked his data. Wakefield ultimately had his British medical license revoked over the incident.

But the rumor lives on, and it produces cruel outcomes. In addition to the aforementioned preventable infant deaths there are the parents of autistic children who believe — some for a time, some to this day — that it was something they did, a decision they made, that caused their child to suffer the condition, when in fact it was mere genetic chance.

The moral, for those who have not already learned, is to treat any information on medical matters gained from the Internet with a large grain of salt. The best place for solid medical advice remains with your own doctors, who care about you and will do the best job of anyone in looking after your and your loved ones’ health.