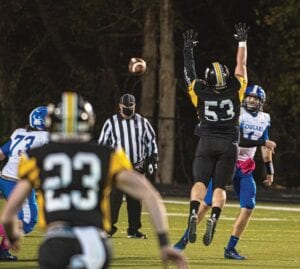 Letcher Central quarterback Carson Adams lets fly a pass under pressure in last Friday’s 62-0 rout at the hands of defending Class 4A state champion Johnson Central on the road. The game was the Cougars’ first since Oct. 2’s win over Harlan County. Letcher Central still boasts a 4-1 record on the season and is scheduled to finish out the regular season schedule on the road at Floyd Central this Friday and at Shelby Valley on November 6. (Photo by Chris Anderson)

Letcher County Central fell to defending 4A state champion Johnson Central by a score of 62-0. It was the Cougars’ first loss of the year and a perfect storm of being rusty from not playing in three weeks due to COVID-19 regulations and having to face one of the best teams in the state.

Johnson Central received the ball to start the game and quickly scored on a 31-yard touchdown run to take a 7-0 lead.

On the Cougars’ third offensive play they fumbled and the Golden Eagles scooped it up and scored on a 41-yard return to increase the lead to 14-0.

The LCC offense went 3 and out and Johnson Central capped off an 8-play 71-yard drive with a 29-yard touchdown run to make it 21-0.

Quarterback Carson Adams connected with receiver Alex Blair on a slant route for an 18-yard gain to start the drive. Adams then completed a 7-yard pass to tight end Luke Goins but the drive stalled after that and LCC had to punt again.

Johnson Central threw a 25-yard touchdown pass to make it 28-0 late in the first quarter.

After another LCC punt on the first play off their drive the Golden Eagles scored on a 54-yard touchdown pass.

Johnson Central then had a 35-yard interception return for a touchdown to initiate a running clock for the rest of the game after going up 42-0.

LCC running back Hayden Brashear made a nice spin move in the backfield to allude a tackler for a 16-yard gain. The Cougars eventually turned the ball over on downs and Johnson Central had a 55-yard touchdown run on its first offensive play.

Johnson Central tacked on 2 touchdowns in the second half to make the final score 62-0.

Coach Junior Matthews said, “The layoff really hurt. Only our second road game of the year and having three weeks off prior is tough. We got overwhelmed from the start and never got our feet under us.”

LCC will look to regroup this week at Floyd County Central. There is a chance the game will be cancelled because of the amount of COVID-19 cases in Floyd County.