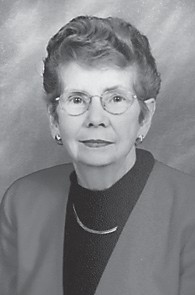 Born in Harlan County to the late George and Lela Peyton, she was the widow of J.T. Ward and a sister of the late Eva Lasley and Edward “Buddy” Peyton.

She was retired in 2005 from the Dawahare Companies and was a member of the First Baptist Church of Whitesburg, having been recognized in 2006 for 50 years of faithful service.

Mrs. Ward had taught the Ladies Sunday School Class until she moved to Lexington, and she and her late husband were instrumental in establishing mission churches for Whitesburg First Baptist Church at Hotspot and Premium.

After moving to Lexington, she became a member of Immanuel Baptist Church.

Funeral services for Mrs. Ward were held April 10 at Milward Funeral Directors in Lexington. Interment will follow at a later date.