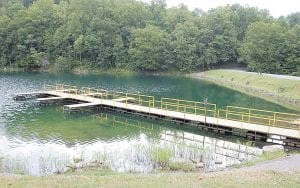 A fishing and boat dock located near the main shelter at Fishpond Lake at Payne Gap has new decking. Other improvement projects are underway. (Photos by Sally Barto)

Several improvements are being made to Fishpond Lake this summer in an effort to attract tourists and improve fishing, camping and picnicking for them and Letcher County residents alike.

Development of a recreational vehicle (RV) park is among the improvements now underway at the lake.

“We have calls all the time wanting to know if we have RV spots for people to come in and stay a week or two,” said Letcher County Judge/Executive Jim Ward. “This will be our first RV hookup spot in the county.”

Ward anticipates that the RV park will be finished within the next four weeks. He said $200,000 in coal severance tax funds were allocated for the RV park and other renovations nearly four years ago, but the project had to be held up until county water lines could be connected at Payne Gap.

Property located between two picnic shelters has recently been leveled and 15 spaces for RVs have been graveled. Ward said the RV park will eventually be concreted. Each parking space with have electrical and water hookup. Grass seed has been sown between the spaces. The RV park will also be equipped with grills and picnic tables. 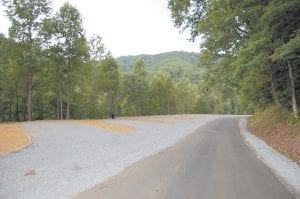 A recreational vehicle park is being created at Fishpond Lake. Water and electricity will be available at each RV parking spot. The project is set to be completed in four weeks, Letcher County Judge/Executive Jim Ward said.

The Letcher County Parks and Recreation Committee will make recommendations at the July fiscal court meeting as to what the fees should be for people to use electricity and water at the lake.

Letcher County Road Department employees hauled nearly 600 dump truck loads of dirt from an area of Fishpond Lake where the all-terrain vehicle (ATV) trailhead is located and used that dirt to fill in land for the RV park. The space near the trailhead will be available for primitive tent camping and possibly more RV parking spaces.

Among other improvements, the fishing dock near the main picnic shelter has a new wooden deck. The road around the lake has been widened and a shelter is being constructed near the old tennis courts.

Renovation plans also include a fishing dock to be built on the upper end of the lake. More playground equipment will also be added.

Ward said if money is available another bathroom may be built and electricity will be available at more of the shelters.

Ward said he eventually would like to have a store built near the main shelter where people could buy food and fishing and camping necessities.

Ward hopes the store can be built with logs saved from trees that have been cleared during the improvement projects. He also wants to use rocks gathered at Fishpond Lake to build fire pits.

“We want to make it look as authentic as possible,” he said.

Ward has also looked at land around the lake to have cabins built. He said Fishpond Lake is a safer place to visit since the formation of the Letcher County Rangers a few years ago.

“Since rangers started patrolling, we haven’t had any problems up there,” said Ward.