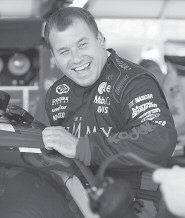 Ryan Newman, projected as a possible teammate for fellow Indiana native Tony Stewart on the two-time NASCAR champion’s new team, will leave Penske Racing at the end of the 2008 season.

Newman’s impending departure was announced this week in a release from the Penske team.

“We want to thank Ryan for his hard work and contributions to Penske Racing over the past nine years,” team owner Roger Penske said in a statement. “We wish Ryan all the best for the future and we’ll continue to focus our efforts on making the Chase with Ryan and the Alltel Dodge team this season.”

Newman, a South Bend, Ind., native, expressed his appreciation to Penske and to the team in a statement, but gave no indication where he will be racing in 2009.

Newman has been with the Penske team since making his Sprint Cup debut in 2000. He got a full-time Cup ride in 2002 and has notched 13 victories, including this year’s Daytona 500.

The 30-year-old Newman, known as one of the best qualifiers in NASCAR history, won 11 of his 43 career poles and eight races in 2003 and finished no worse than seventh in the season points from 2002 through 2005. But Newman went winless in both 2006 and 2007 and slipped out of the Chase for the championship, finishing 13th and 18th.

He has struggled since giving Penske his first Daytona win and is currently 16th in the standings.

The team said Newman’s replacement will be announced “in the near future.” Penske test driver David Stremme is considered a leading candidate for the job.

Stewart, who is from Columbus, Ind., announced last week he will leave Joe Gibbs Racing at the end of 2008 to become driver and part-owner of the team currently known as Haas-CNC Racing. The name will be changed to Stewart-Haas.

The two-car team currently fields the No. 66 car for Scott Riggs and the No. 70 car for Jason Leffler, and both cars are outside the top 35 in owners points.