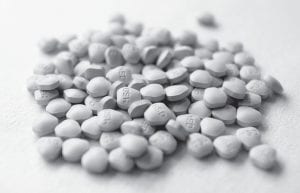 Long-term results from a major federal study released last week show the drug finasteride, sold as Proscar by Merck & Co., cut prostate cancer risk by 30 percent without raising the risk of dying of an aggressive form of the disease as earlier results hinted it might. (AP Photo)

Long-term results from a major federal study ease worries about the safety of a hormone- blocking drug that can lower a man’s chances of developing prostate cancer.

The drug cut prostate cancer risk by 30 percent without raising the risk of dying of an aggressive form of the disease as earlier results hinted it might.

The new work could prompt a fresh look at using the drug for cancer prevention. Experts say it could prevent tens of thousands of cases each year, saving many men from treatments with seriously unpleasant side effects.

The drug is sold as Proscar by Merck & Co. and in generic form as finasteride to treat urinary problems from enlarged prostates. It’s also sold in a lower dose as Propecia to treat hair loss.

A decade ago, the drug was found to cut the risk of prostate cancer. But there was a small rise in aggres- sive tumors among its users. Some researchers said that by shrinking the prostate, the drug was just making these tumors easier to find in a biopsy sample — not causing them.

But the concern led the Food and Drug Administration to turn down the drug for cancer prevention and warnings were added to its label.

Now, with 18 years of follow-up from that earlier study, researchers report that men on the drug were no more likely to die than those not taking it.

That’s reassuring because if the drug were truly spurring lethal tumors, there would have been more deaths among its users as time went on, said Dr. Michael LeFevre, a family physician at the University of Missouri.

LeFevre wrote an editorial that appeared with the study in the Aug. 15 edition of the New England Journal of Medicine. He is one of the leaders of the U.S. Preventive Services Task Force, an independent panel of doctors who advise the federal government. The group has not taken a stance on finasteride for prevention but has advised against screening with PSA blood tests.

Screening does more harm than good, the panel has said, because although 240,000 new prostate cancers are diagnosed each year in the United States, only about 30,000 prove fatal. That means many men are treated for cancers that grow too slowly to be life-threatening, and often suffer sexual and urinary problems as a result.

The study, led by Dr. Ian Thompson at the Cancer Therapy and Research Center in San Antonio, was done to see whether finasteride could lower the risk of prostate cancer in men who were getting screened with annual PSA blood tests, as many still choose to do.

Researchers assigned 18,882 men 55 or older with no sign of prostate cancer on blood tests or a physical exam to take finasteride or dummy pills for seven years. When the study ended, those who had not been diagnosed with prostate cancer were offered biopsies to check for hidden signs of the disease.

For the new analysis, researchers tracked the study participants for a longer time — 18 years in all since enrollment began. Only about 10 percent of men on finasteride developed prostate cancer versus 15 percent of those on dummy pills. Aggressive tumors were found in 3.5 percent of men on the drug versus 3 percent of the others. Yet 78 percent of both groups were alive after 15 years.

That means the drug cannot be recommended to prolong life, just to ease suffering by preventing disease, LeFevre said.

Finasteride’s other impact is financial. Proscar and a similar drug, Glaxo- SmithKline PLC’s Avodart, cost about $4 a pill. Generic finasteride is available for less.