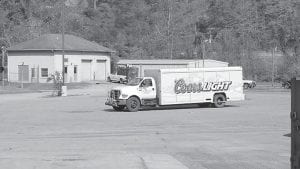 Beer sales have been moving briskly in Whitesburg since late last Friday afternoon, when the Food City grocery became the first retail store to begin selling alcohol legally in Letcher County since 1943.

“We had a very good weekend,” said Shaun Marcum, store manager of Food City in Whitesburg. “It’s what I expected, maybe a little better.”

Food City is one of two retail stores that began selling beer Oct. 19 under Whitesburg’s new alcohol ordinance. Legal sales had been anticipated since late June, when Whitesburg residents voted by a margin of more than two-to-one to expand alcohol sales from restaurant only.

The other store that began selling beer last Friday was East Kentucky Discount Tobacco and Beer, a new business located at Ermine.

On Oct. 12, Rite Aid became the first store to be issued a retail beer license by the Kentucky Department of Alcoholic Beverage Control, but didn’t receive its first beer shipment until Tuesday (Oct. 23). 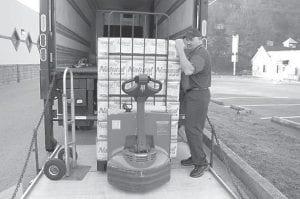 “We will be selling a variety of beer at the affordable prices customers have come to expect from Rite Aid,” said Eric Harkreader, public relations specialist with Rite Aid Corporation in Camp Hill, Penn. “Beer will be available for purchase during our regular hours on Monday through Saturday, 8 a.m. to 9 p.m.”

Food City was issued a retail beer license on Oct. 19 and the first beer truck arrived after 2 p.m. that same day. By the time the beer was unloaded, inventoried and placed in the cooler, it was after 5 p.m. before sales could begin.

News of the first truck’s arrival at Food City and the expected sales at East Kentucky Discount Tobacco and Beer circulated through the county quickly after a short story and photo were posted on The Mountain Eagle’s website and menbusy tioned on the newspaper’s social media page.

“It was extremely crowded,” said Marcum, adding that customers were lined up outside the stockroom and near the beer aisle. 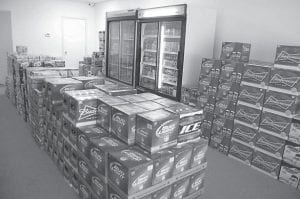 All beer and wine coolers delivered Friday to Food City — about five pallets’ worth — have been sold. The 44-foot cooler at Food City was restocked twice on Monday. Marcum said the store expects to receive beer shipments twice a week.

At least 70 of 120 employees at Food City have undergone special TIPS training (Training for Intervention Procedures) in order to be able to sell alcohol to the public. Marcum said every customer who purchases alcohol at Food City must show proof of identification.

“If you don’t have a valid ID, you can’t purchase,” said Marcum.

East Kentucky Discount Tobacco and Beer, located at the former site of Janie’s Dairy Bar near the mouth of Craft’s Colly, also was issued a retail beer license last Friday and began selling beer that evening, the first day of business for the store. 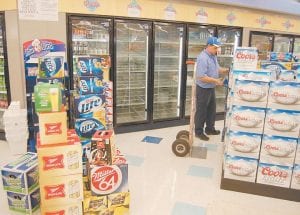 STOCKING THE SHELVES — Shawn Blackburn, a merchandiser with Clark Distributing of Betsy Layne, has been stocking store shelves with beer in the City of Whitesburg since legal sales began October 19. When this photograph was taken on Tuesday, Blackburn was delivering beer to Rite Aid Pharmacy, the first retail outlet to receive a license to sell beer under the city’s expanded alcohol ordinance.

“We have sold more beer so far than we have cigarettes,” said store owner Ervinia Haynes. “For nobody to know we are here, we did good.”

Haynes said her store sold about $2,000 worth of alcohol during a half-day on Friday and all of Saturday. Haynes said many of her customers told her they had been buying their beer in Virginia.

Haynes said demand for cold beer has been so high she may have to install more coolers in the store, which will have its grand opening on Nov. 1.

“People like their drink with certain foods and they are going to do that anyways,” she said.

“Once everyone gets established and liquor comes in, it will bring people into Whitesburg and they will buy gas while they are here,” said Pratt. “They will probably eat here (too).”

Pratt said people who traveled from Letcher County to buy alcohol in Virginia probably also bought groceries and ate at restaurants while they were there.

The City of Whitesburg receives three percent of all beer sales. Once retail package liquor licenses are issued, the city will receive four percent of sales.

Walmart is expected to be issued a retail beer license in the coming weeks.

It is against the law to sell alcohol on Sundays or while polls are open on Election Day, which is Nov. 6.