Hello, everyone, hope you are all doing well.

I want to thank everyone for giving me some news this time. Maybe I won’t be so boring.

Sally Taylor of Neon, sent me a four-generation picture of her family and she also told me about the Golden Girl pageant on May 10. She won Miss Congeniality and also the talent contest. The proceeds went to the Relay for Life. She said they had a lot of fun. I’m glad you won, Sally, you are a good friend.

Late happy birthday, Pauline (King) Bates! Your sister, Linda Polly, and her daughter told me. You owe me, Pauline, for not telling your age. You are a lot younger than me.

I was sorry to hear of the death of Belvia Adams. I attended the funeral. It was good seeing all the Trent brothers, David and Tommy and Johnny Mack from Indiana. David lives here.

I sat with Bobbie Jean Collins and Mable Jo Buttrey. It was nice seeing them and doing some talking.

I enjoyed a call from Iva Lee (Absher) Cheatam of Somerset, the other night. She was one of our Marlowe people. 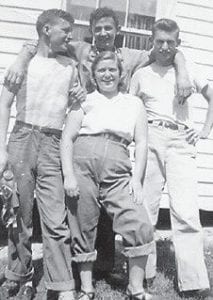 I also got a call from Barbara Stidham. She was trying to get in touch with some people for a 50th Whitesburg reunion. She asked about Nancy Niece. Her dad was either Earl or Corbett Niece and she had two brothers, Earl and Corbett Niece. They were both in the class of my sister, Kathleen Brock. She knew Jenetta Howard, my sister-inlaw. I didn’t get a chance to find out more about her. She got a beep on her phone. She did say there weren’t many of the people still living.

On our way back from the Veterans Center on Thursday, Shirley and I came back the Hindman way and visited a little while at the beautiful home of Donnie and Connie Fields. We enjoyed the visit. Connie’s mother, Dixie Hall, was there and some of her grandchildren, Laurel Hall, 8, and Hunter Hall, 13 1/2, a little man with such good manners, and also a friend, Katie Braswell, visiting from Romeo, Mich. They were visiting their Aunt Connie so they could swim all week.

Of course we couldn’t pass Yoder’s without stopping to buy some goodies.

I enjoyed a letter from Dorothy Tacket. She and her sister, Linda, and her husband, Dennis Hall, had visited their sister, Mazie Adam, on Craft’s Colly. They passed my place and saw my goats and they thought they were so pretty. They are! She said her daughter had one of the bottle that its mother wouldn’t claim. Deloris, I hope you don’t spoil it as bas as my little Annabell.

Dorothy wanted to say hello to all her old Marlowe friends and to her dear brother, Hugh Watson Pennington. He gets The Eagle and loves to hear what’s going on here with his Marlowe friends.

She said her daughter, Lucille’s, oldest son got married in Texas, where he is stationed after some training. He will be going to Afghanistan. His name is Philip Marshall Graves. She worries about him.

“You are a number one mother/With a smile so sunny/ Loved by all/Because you are sweet as honey/Beautiful, kind and wise as well/There is no other mom/Like Dorothy Bell/ Keep going along singing your song/Loving your young’uns and you won’t go wrong/I took the time/To make up this rhyme/Because I’m so proud/That this mother is mine.”

Seems like I have mentioned lots of names this week. It was good hearing from all of them.

I’m sure you are tired reading so I’ll quit here and hope to meet you next week at the same time. So may God bless all of you. Try to go to church somewhere this week. Whitesburg Holiness Church at Van is having its homecoming and invites everyone. The pastor is Bro. Larry David Caudill.

This news from the Ermine Senior Citizens Center:

“Relay for Life had a contest among all seven of our senior citizens center to raise the most money. Ermine Center raised $551.60. We won the pizza party. We celebrated May 27, played bingo, gave away a lot of nice prizes, and had a wonderful time. Forty-seven attended. Thanks, Alberta, and your co-workers for the pizzas and drinks. We were glad to take part in donating the money.

“Our senior citizens work together and really enjoy the friendship we have at our center. Thanks to everyone that donated for this cause.

“Lizzie M. Wright’s company over Memorial weekend were her son, Darius, and wife Sheila, daughters Jessica and Lauren. They live in Alabama. Sunday they drove across Pine Mountain on into Cumberland. This was the first time his family had been on Pine Mountain. They stopped and took lots of pictures. After coming back, they drove to Fishpond Lake and on into Virginia. They had a wonderful day. Lizzie Mae sure missed her family after they left. Hurry back, kids.

“If you are a senior citizen, come and visit us. We are sure you will enjoy it, and will come back. Thanks, Debbie and the workers at our center, for the fine job in helping us. God bless until