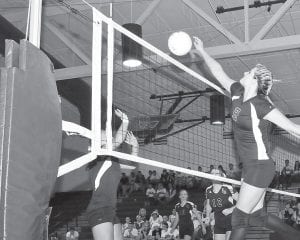 Lady Letcher Central’s Lisa Frazier spiked the ball across the net as the Lady Cougars earned their sixth straight regional championship on Oct. 21. After handling Leslie County in the semi-final round, the perennial champs cruised past host Powell County with a pair of 25-13 winning sets. The Lady Cougars will play Region 12 champion Southwestern at Bellarmine University in Louisville on Friday at 7:15 p.m. (Photo by Chris Anderson)

The Letcher County Central High School Lady Cougars volleyball team started its 2010 season much the same as it has the past five years. The first day of tryouts of every sports team is a special day. The excitement, the enthusiasm, the anticipation, and the expectations are always present for those first few days. All the athletes want to show their skills, strut their stuff , impress their coaches, and befriend prospective new teammates, always with the goal of having their names on the list the coach posts at the end of tryouts.

For those fortunate enough to have their name listed on the team roster, it is the beginning of a long, trying season. All of that energy and excitement present for tryouts fades as the preparation for the season takes center stage. A few weeks of practice only turns into a few more weeks of practice with games thrown into the mix. Then reality sets in; often that reality doesn’t match the expectations from the beginning of the season. But every now and then, if you are extremely lucky and things work out, you get to feel like you hit the jackpot. You get to play on a team that is very good and they win . . . and win . . . and win some more. You get to keep playing when most others are home getting their uniforms washed and equipment ready to turn back in to their school. They are getting ready to try out for another sport and start the process all over again. And you are still competing and playing in your sport.

The Letcher Central Lady Cougar volleyball team started its 2010 season this way. The team lost one all-region player to another sport and the 14th Region Player of the Year and several other key players to graduation from last year’s 14th Region championship team, the school’s fifth straight region title. That team finished the year with 34 wins and only three losses and the Lady Cougars’ fifth consecutive trip to the KHSAA State Tournament.

There were several question marks when tryouts started on July 15. Back were starting senior hitters Myrika Begley and Lisa Frazier, along with junior setter Janetta Dixon, junior back row players Sierra Dixon and Kristin Blair, and sophomore setter/hitter Ari Nichols. Senior hitter Lauren Thomas and sophomore hitter Julie Cornett, Keisha Collins, and Emi Nichols all returned from a very successful JV team, anxious to work their way into the rotation for the 2010 version of the Lady Cougar volleyball team.

This year’s team started its season winning the 53rd District Seeding Tournament at Knott Central, beating both Knott Central and Jenkins in two matches. This gave the Lady Cougars the number one seed for the regular 53rd District Tournament at the end of the season. The team went on to win the East-West Spikefest at Estill County and the Edmonson County Invitational Touranment later in the year.

The Lady Cougars finished the regular season with a record of 25 wins and five losses. They later captured the district title at Knott Central, beating Jenkins 2-0 in the championship match. It was their sixth consecutive district title. This propelled them into the 14th Region tournament last week at Leslie County.

They beat Estill County 2-0, followed that up with a 2-0 match in the semis against host Leslie County. They followed that up a few minutes later with a sound 2-0 match in the finals against Powell County. This gave the Lady Cougars their sixth consecutive regional title, and a Letcher County volleyball team their 11th consecutive regional title. The Lady Cougars will travel to Louisville next Friday to play 12th Region champion Pulaski Southwestern at Bellarmine University at 7:15 p.m.

Several Lady Cougars have distinquished themselves this past season; a number of them won individual awards along with the numerous team awards. Lisa Frazier, Julie Cornett, and Ari Nichols were named all tournament at the Edmonson County Invitational. Named to the All 53rd District team were Lisa Frazier, Myrika Begley, Janetta Dixon, Ari Nichols, and Julie Cornett. Last week Lisa Frazier, Ari Nichols, Julie Cornett, and Emi Nichols were named to the All 14th Region Tournament Team with Frazier named the Most Valuable Player in the tournament. She was also named the coaches’ 14th Region Player of the Year.

So the Lady Cougar volleyball team will take their impressive 29 win and five loss record with them as they travel to Louisville for the KHSAA State Volleyball Tournament on Friday.