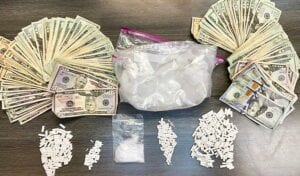 DRUGS AND MONEY — While federal officials focus on opioids such as oxycodone and hydrocodone, the drug of choice in Letcher County is now meth, police say. Pictured, a bag containing 1.12 pounds of methamphetamine, more than 250 Xanax pills and thousands of dollars was confiscated during an arrest last week. (Photo courtesy Letcher County Sheriff ’s Department)

Two traffic stops of the same truck on two consecutive nights yielded two arrests and one and a quarter pounds of methamphetamines, the Letcher County Sheriff ’s Office said.

“To put it in perspective, a pound of meth is what we took off the street last year for the whole year,” Sheriff Mickey Stines said.

Stines said Norris confiscated 10.24 grams of meth and $5,000 cash from Ihla’s vehicle and served two outstanding warrants on him, and five more on two passengers in the pickup truck.

The following night, Stines said, Norris was patrolling on US 119 North toward Mayking when he saw the same yellow Dodge pickup with the light out on its license plate.

When he attempted to pull the vehicle over, the driver accelerated, leading Norris on a chase up KY 1862. Norris said the driver stopped a moment on that road and a woman jumped out of the passenger side of the vehicle and ran, while the truck continued on. The truck turned in at Millstone and drove about a mile and a half before the driver stopped the truck and fled on foot, Norris said in a citation. Norris said he chased the man across a yard and was still a good distance behind him yelling for him to stop when the man suddenly put his hands up and lay down on his stomach.

Upon searching the vehicle, Norris said he found 1.12 pounds of a substance believed to be meth, more than 250 Xanax pills, and $4,000 in cash. Stines said drug dealers have been crushing the cheaper and less sought-after Xanax and sometimes other pills and adding the resulting powder to the methamphetamine to make it go farther.

He was also wanted on two warrants in Pike County for trafficking in methamphetamine, bail jumping and tampering with physical evidence.

Stines said he believes Ihla and Fisher are step-brothers, and were driving the same truck because of that familial relationship. The sheriff ’s department has impounded the vehicle.

Police are still looking for a woman who jumped out of the truck and ran when the truck stopped once during the chase.

Stines said the case may be turned over federal authorities because of the amount of meth involved. He said the only two cases he’s aware of here that have involved more of the drug was a state police case in which 2 pounds were confiscated, and a case worked when Sheriff Danny Webb was in office that involved nearly 4 pounds.

Meth is usually measured in grams, not pounds, and under Kentucky law anything over 2 grams constitutes first-degree trafficking. It takes 453.59 grams to make one pound.