Samplings of a ‘Kentucky breakfast’

By MARLA TONCRAY
The (Maysville) Ledger-Independent 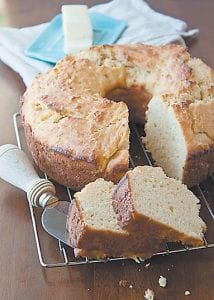 For anyone that knows me fairly well, the fact I’m writing a food column will probably send him or her into a fit of laughter.

Today’s column features recipes taken from the cookbook “A Slice of Kentucky – Sharing Our Recipes” written by the Cookbook Ladies, published by McClanahan Publishing House Inc. in 2003.

This particular cookbook came from the kitchen of my fiancé’s late mother, Patricia Breslin. Pat had an extensive cookbook collection, being a woman who loved to entertain.

Her collection has been split up between her daughter, Mary, and granddaughters, Olivia, Erin and Evan, with the leftovers coming to me. That may seem ironic given my earlier admission, however, being in charge of the food page here at The Ledger Independent, I felt having the collection at my disposal would be better than giving it away.

This sampling of recipes comes from the section “Breakfast before a day at Fancy Farm and politics.”

The first recipe, Sally Lunn required some research, since I’d never heard of it. Turns out, it is a “bun,” but not really a bun and there is an eating-house in Bath, England named for the famous bun.

According to Wikipedia, “A Sally Lunn is a large bun or teacake made with a yeast dough including cream, eggs, and spice, similar to the sweet brioche breads of France. Served warm and sliced, with butter, it was first recorded in 1780 in the spa town of Bath in southwest England. The same name has been applied to various unrelated breads in the US since the early 20th century…

“The medieval building now known as the Sally Lunn Eating House is at 4 North Parade Passage in Bath. The site was originally occupied by the south range of Bath Abbey and the lowest floor level dates to the reconstruction of the abbey after a great fire in 1137. The masonry oven in the basement dates from this time. After the Reformation it came into the hands of the Colthurst family of Wardour Castle who sold it to John Hall of Bradford on Avon in 1612. In 1622 Hall leased the site to George Parker, a carpenter who built the current house. The Hall estate was later acquired by the 2nd Duke of Kingston, who sold the house to William Robinson in 1743. There may have been baking on a small scale during the 1700s but it only became the main commercial use of the building around the turn of the century.

“The building was acquired in the 1930s by Marie Byng-Johnson who opened it as a tea-room specializing in Sally Lunn buns, promoted with a story that she had discovered an ancient document in a secret panel above the fireplace explaining that Mlle. Sally Lunn was a young French Huguenot refugee who brought the recipe to Bath around 1680.”

So now that you know some history about Sally Lunn, here are some recipes for making your own Kentucky breakfast.

Sally Lunn
1 stick butter
1/2 cup sugar
3 large eggs
1 cup milk
2 cups flour
1 Tbsp. baking powder
1/2 tsp. salt
Cream the butter and
sugar in a large bowl until
well blended. Beat the eggs
in another bowl and add
the milk. Combine the flour,
baking powder and salt. Add
the flour mixture and the
milk mixture alternately to
the butter mixture, beating
after each addition. Pour
the batter into a coated tube
pan. Bake at 350 degrees
for 30 to 40 minutes or until
golden brown. Serve hot
with butter. Makes 10 to 12
servings.

cheese
8 eggs, beaten
1 1/2 cups milk
1 tsp. salt
1/2 tsp. pepper
Brown the sausage and
onion in a skillet; drain.
Divide the sausage mixture evenly between the
two piecrusts. Combine
the cheese, eggs, milk, salt
and pepper. Pour the egg
mixture evenly over the sausage in each quiche. Bake at
375 degrees for 30 minutes.
Serves 16.

Good Morning Grits
8 cups half and half
1 tsp. salt
1/2 tsp. garlic powder
1/2 tsp. pepper
2 cups quick-cooking
grits
8 ounce package cream
cheese, cubed
12 ounce package shredded Cheddar cheese
1 tsp. Tabasco sauce
Combine the half and
half, salt, garlic powder and
pepper in a saucepan and
bring to a boil. Stir in the
grits and return to a boil;
cover and reduce the heat.
Simmer for 5 minutes, stirring occasionally. Add the
cream cheese, Cheddar
cheese and Tabasco sauce.
Stir the mixture until the
cheese is melted. Serves 8
to 12.

with the salt and pepper.
Place half of the potatoes
in an even layer in a coated
skillet. Cover the potatoes
with the cheese, bacon
and green onions; add
the remaining potatoes.
Cook over a high heat for 5
minutes, shaking the skillet
gently to keep the potato
cake loose. Lift the edges
with a spatula to see when
the potatoes have a golden
brown crust. Place a plate
over the skillet and invert
the potatoes onto the plate.
Slide the potatoes back
into the coated skillet, uncooked side down. Cook
for 5 minutes longer or until the potatoes are golden
brown. Cut the potato cake
into wedges and serve immediately. Serves 4.

Simple Salsa Egg Bake
12 eggs
1/2 cup half and half
11 ounce can whole
kernel corn with red and
green peppers
10, 6-inch corn tortillas,
cut into squares
4 ounces shredded
Cheddar cheese
2 cups salsa
1 cup sour cream
1 cup guacamole
Combine the eggs and
half and half in a bowl and
beat slightly; add the corn.
Place the tortilla squares in
the bottom of a coated 9 x
13 inch baking dish. Pour
the egg mixture over the
squares. Sprinkle the egg
mixture with the cheese.
Cover and chill overnight.
Cover and bake at 375
degrees for 25 to 30 minutes or until the eggs are
set. Let stand, covered, for
5 minutes. Uncover and
top with the salsa. Serve
with the sour cream and
guacamole. Serves 12 to
15.