Sandra Brown in no ‘Tailspin’ 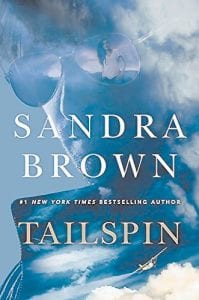 The jacket of author Sandra Brown’s latest thrilling mystery, Tailspin, is seen in this image provided by the publisher.

In “Tailspin” by Sandra Brown, Rye Mallett has a talent for flying planes, and his piloting skills have gotten him out of many jams. One night during a particularly nasty storm that has shut down the Atlanta airport, he’s asked to deliver a black box to a Dr. Lambert, since the material inside is time sensitive. When he’s about to land, a sabotage attempt forces him to crash land. He survives with hardly a scratch, but his luck changes when a woman shows up claiming to represent Lambert and wanting the black box.

Dr. Brynn O’Neal refuses to say what’s in the box, but assures him it’s critical that it reach its destination on time. Mallett doesn’t know if he can trust her, but with the act of bringing down his plane and trying to kill him fresh in his mind, he decides to take the leap and help her make the delivery. There are some nasty people with powerful connections who want the contents for their own purposes, even if it means killing Mallett and O’Neal.

Brown knows how to craft roguish but loveable men with strong and likable independent women, and “Tailspin” is no exception. The mystery of the contents of the box provides an intriguing and puzzling thriller, and the final reveal makes the reader adore the main characters even more. Fans of Sandra Brown will enjoy this one, and those who admire thrillers with a dose of romance and sex should jump headfirst into this book.