Sandwich doesn’t have to be fattening

By JIM ROMANOFF The Associated Press 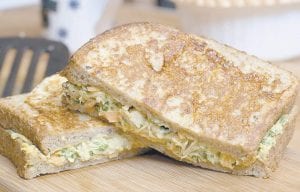 This Mediterranean inspired French Toasted Tuna and Hummus Sandwich is hearty enough to be a supper sandwich but still healthy thanks to substituting hummus for the mayonnaise and packing it with fresh vegetables. (AP Photo)

But with all that high-fat meat, cheese and greasy gravy, these heaping sandwiches aren’t exactly virtuous.

For example, a grilled Reuben: Between the meat, cheese and dressing, this sandwich can be a nutritional nightmare, weighing in with as much as 49 grams of fat.

But you can make a hot sandwich that’s bursting with flavor, low in fat and filling enough to make a satisfying supper.

The tuna salad that’s at the heart of this sandwich is made with store-bought hummus as a healthier stand-in for the more traditional mayonnaise. Plus, shredded carrots and fresh spinach are mixed in for added nutrition.

The sandwiches are built on multi-grain bread, then dipped in egg, French toast-style, before being griddled to golden perfection.

Make sure to grill the sandwiches covered over very low heat to ensure that the egg will be completely cooked.

If you want to complete the Mediterranean theme, serve these sandwiches with
a Greek salad made with chopped cucumber, tomatoes, Kalamata olives, feta cheese
and a red wine vinaigrette.

Press all liquid from tuna. Crumble the tuna into a bowl. Add the hummus, spinach, carrots and cumin, then mix thoroughly. Make four sandwiches with the bread and tuna mixture.

In a shallow bowl, whisk together the milk, egg and egg whites. Dip one side of each sandwich at a time into the egg mixture until it is lightly soaked. You should use up all of the egg mixture.

In a large nonstick skillet (or two medium nonstick skillets) over very low heat, heat oil. Add the sandwiches and cover the skillet loosely with a lid or piece of foil.

Cook until the undersides of the sandwiches are wellbrowned, 8 to 10 minutes. Turn the sandwiches over and cook, still covered, until browned on the second side, about 8 minutes more.