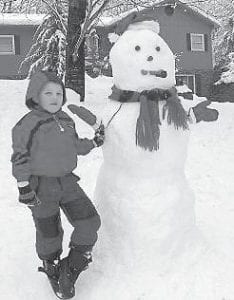 FUN AT GRANDPA’S — Weston J. Stidham, 5, of Millstone, and cousin Logan Couch, 3 months, enjoyed 15 inches of snow on Dec. 21 at the home of their grandparents, Johnny and Judy Adams of Cram Creek. Weston is the son of Wesley and Jill Stidham and is also the grandson of Bill Stidham of Whitesburg and Joy and Ron Dickle of Ohio.

Hello. I hope that everyone is thawed out and has their power back on.

Our electricity was off from Saturday at 2 a.m. until Sunday at 7:15 p.m. I sure was glad to get heat back in the house. My husband and I stayed in bed under the covers and stayed warm. This is the first time we’ve experienced an outage for more than three or four hours. Hopefully this doesn’t happen very often.

I want to thank the electric company for all the hard work and being out in the cold all night. I know people complained, but they had a lot of people without power, and they can’t get to everyone at once. Thanks again, Kentucky Power. We appreciate you.

My sister Kathy and Eddie were without power almost a week. They want to thank the Ermine Senior Citizens Center and Judge Jim Ward for all they did. They stayed at the center one night and were treated real well, and fed good. Thanks, Deb Slone. Then they came to our house and stayed until Christmas Eve. I sure enjoyed having them.

Hopefully everyone had a good Christmas. I saw Santa Claus on a Harley motorcycle in Hazard on Christmas Eve. I didn’t see any presents when we passed and waved at him.

We saw Dorothy Jean and Glen Miles and their grandson Neal at Food City before the storm hit. We also saw Levene and Sonia Fields. She said that she was doing OK at the present time. Our prayers still go out to her.

Burdine Gilley in Columbus, Ind., is in critical shape, it doesn’t look good for him. Keep him, Virginia Ann, and their family in your prayers.

Charles Miles turned 67 on Christmas Day, and Barbara Maggard Boggs turned 72 on the same day. I hope they both had a good one, and most of all, happy birthday, Jesus!

The Santa Toy Truck Train came down on Cowan on Dec. 23. There didn’t seem to be as many kids out this year, I guess because of the snow and power outages. Hopefully it was a success this year.

Tammy and Wayne Turner and all of the volunteers put a lot of work into it. They had 10 trucks full this year. They wouldn’t give me a present, I guess I had been too mean this year.

I thought Herb Fields was going to throw a snowball at Kathy and me, but he chickened out. He wouldn’t want the two Fields girls on Cowan to whip him. Ha, ha! We love you, Herb.

I had a nice talk with Oma Hatton on the phone recently. She is so nice. I can’t wait to meet her in person. She talks about going to Pine Mountain Grill a lot, and my family goes in there a lot, too. We have probably seen each other and just didn’t know it.

I had asked her about a preacher who came to Cowan several years ago. He was a Sandlin, and we decided it was probably Sid Sandlin. I sure did enjoy him. She said that he was 90 years old, and lives in the nursing home. Maybe I will go see him.

Sorry I didn’t write my news last week, but with the weather being the way it was, my whole body was frozen from the tip of my nose to the bottom of my toes; that’s why I stayed in bed.

You know, when the electricity was out and I was praying for it to come on, I decided to thank the Lord for what I have. At least we had shelter and food, and some people probably slept in cardboard boxes or under bridges and didn’t have anything to eat.

I thought it was bad enough not to have a hot cup of coffee, so my heart really went out to the less fortunate.

So I pray that I will not be a complainer, and always be thankful for what I have. It’s not very much, but it’s enough. You know, I have realized that you can live without so much material things. When you have a lot you always worry that someone will steal it, and you try to protect it. You’re not as giving. But when you have a little, it seems the Lord blesses you more and you’re able to help others. Not in monetary value, but of giving of yourself, and you’re not worried about helping others and worrying that you will not get back what you give.

You can help others by being kind, feed them when they’re hungry, and clothe them when they need clothed. The Lord will bless you over and over in return.

Until next year. I hope everyone has a better new year. Be good to one another, and attend the church of your choice.

Pray for our churches, our country, our president and all the service men and women, and all sinners.