Santa sure is a colorful guy 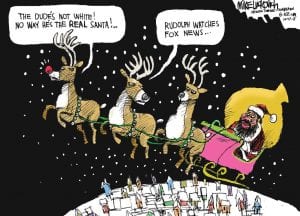 Many of us who grew up believing in Santa Claus can recall that moment when we started having our doubts.

If we were lucky, we had a special someone in our lives willing to quash the ugly rumors for a little bit longer.

That was my mother. She had her reasons. She was only 8 when her parents divorced and handed her off to grandparents, who raised her. She faced hard realities at a young age. After she became a mother, she saw it as her maternal mission to wring out every bit of life’s magic for her four children.

My mother had a gift for the alternative narrative. This came in handy when, at age 7, it dawned on me that Santa was a little too ubiquitous in Ashtabula, Ohio.

How could Santa be at Hills Department Store, J.C. Penney and Kmart on the same day? That was what I wanted to know.

My mother laid out the facts with the expertise of someone who’d just had that very conversation with Santa’s missus.

I was right, she said, to suspect that Santa could not be everywhere. The brilliant Mrs. Claus — in Mom’s stories, the wife was the genius in every marriage — came up with the idea to hire some of the elves to fill in for him. They had photographic memories, Mom further explained, so they were able to pass along to Santa the wishes of every single child who sat on their laps.

Whew. She was good.

I met my first black Santa at our fourth-grade Christmas party, in 1966. He looked suspiciously like my classmate’s father, which I duly noted to the clueless child, in front of my mother. The little girl burst into tears, and I was grounded for a week, which gave me plenty of time to ponder the wisdom of an unexpressed thought.

In the spirit of Christmas, I want to thank Fox News anchor Megyn Kelly for stirring up that memory after she insisted recently on her show that Santa is white, and so was Jesus.

Well, let’s talk about Jesus. He was a Jew who lived 2,000 years ago in the Middle East. The odds that he was white are about as good as my chance of waking up as a natural blonde tomorrow.

Some have defended her, saying this was the version of Jesus she knew as a child. I get that, but we’re living in the grownup world now. The portrait in our living room made Jesus look like a blueeyed white guy with an enviable tan, but I don’t recall ever thinking about his race. I was far more obsessed with his demeanor.

Why, I asked my mother, did Jesus never smile?

She had no patience for this line of questioning.

“He has a lot on his mind,” she’d snap. She wasn’t big on glum Jesus, either; I just knew it. Her Jesus was a happy warrior for justice.

Back to Santa. Kelly’s glib assertion that Santa is white — not coincidentally, white just like Kelly — triggered the usual round of derision and ridicule, mostly from liberals. I winced as some of them insisted on national television during the day and at dinnertime that Santa Claus does not exist.

“Little ears, little ears!” I yelled to nobody who was listening. Why must we liberals be more factual than necessary?

Kelly deserved criticism. She is a highly educated white woman who exhibited an astonishing lack of awareness for how children of color yearn to see themselves in their heroes, fabled or otherwise.

That is why she reminded me of my far less educated mother. Mom grew up in a rural patch of white America and then spent her entire adult life in a small but diverse town full of people she might never have met had she stayed on the farm.

These encounters chipped away at her youthful biases. By the time I had blown it with Santa’s daughter at that fourthgrade Christmas party, my mother saw the world as far more complex than she had been raised to believe.

Little girls imprisoned in their own homes for bad behavior have plenty of time for reflection. Still stinging from my mother’s reprimand, I asked whether she thought Santa could be black.

I don’t remember her exact words, but I still recall her message: Santa is magical, and so he can be whoever we want him to be.

I am grateful for a mother who didn’t care which Santa we saw landing on rooftops. She just wanted her children to feel the magic for as long as we could.

I still believe in Santa Claus.

For my grandsons, you bet I do.