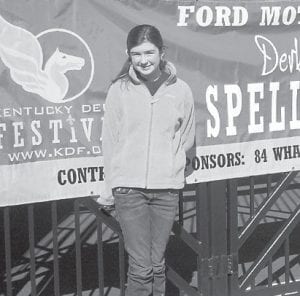 Out of 68 spellers, Brooke Saurer, a sixth grade student at Whitesburg Middle School, placed 18th in the Ford Motor Co. Kentucky Derby Festival Spelling Bee finals on March 10 at the PNC Club at Papa John’s Cardinal Stadium in Louisville. Brooke, 11, correctly spelled croquet and numismatic in the first and second rounds of the spelling bee, but misspelled gadjo in the third round.

This is Brooke’s second time competing in the state spelling bee. She competed in 2010 as a fourth grade student representing West Whitesburg Elementary School.

Brooke is the daughter of James and Valerie Saurer of Partridge.