Save time with this meal 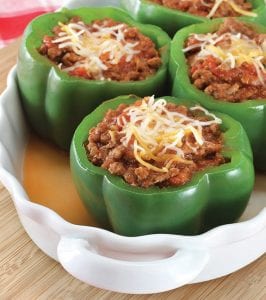 I’ve found that using my microwave oven saves hours of time and keeps my kitchen clean and cool. The history of the microwave oven goes back to 1946, when Dr. Percy Spencer, an electronics genius and war hero, was touring one of the labs at the Raytheon Company. It was testing a vacuum tube called a magnetron, the power tube that drives a radar set. As Dr. Percy stood in front of the “radar box,” a candy bar in his pocket melted.

Dr. Percy tried other experiments with food, including using popcorn kernels. He designed a metal box around the magnetron with microwave power. Engineers developed and refined the idea, and the first commercial microwave oven hit the market in 1947. However, original response was negative, and it wasn’t until 1975 that a microwave oven was created for home kitchens.

This recipe for Quick Stuffed Bell Peppers is easy to assemble and cooks in minutes. It freezes well, so double the recipe, and when you’re pressed for time you’ll have a homemade meal in just minutes!

with a side of rice and a salad.
Angela Shelf Medearis is an
award-winning children’s author,
culinary historian and the author
of seven cookbooks. Her new
cookbook is “The Kitchen Diva’s
Diabetic Cookbook.”
©2018 King Features Synd.
and Angela Shelf Medearis