Saving at a wicked clip 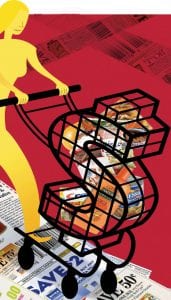 Michelle Harrison recently paid 10 cents for $40 worth of groceries.

“And it would’ve been more, but the store had a 20-coupon per transaction limit,” Harrison says, laughing.

She and fellow coupon diva Frances Bullock say it’s not hard to get there.

The frugal friends say in a typical week they save about 70 percent off their grocery bills after a couple of hours of clipping and sorting.

And during a store’s triple coupon promotion, they can get most of their groceries for free. So many items, in fact, they often have enough to donate to area food pantries.

As rising gas prices and the slowing economy create fresh anxiety about family budgets, coupons are an easy way to stretch a buck.

The Charlotte, N.C., moms approach coupon management like a part-time job. But they stress that even folks who work full-time can save at least 50 percent off their groceries with just two hours of clipping and planning, and a couple more to shop at multiple stores each week. 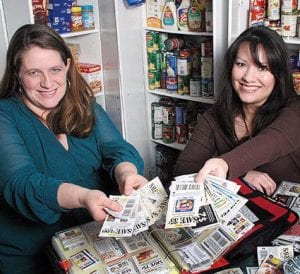 SUZANNE SUMMERVILLE/MCCLATCHY NEWSPAPERS Michelle Harrison (left) and Frances Bullock are known as the “coupon divas,” saving about 70 percent every week on groceries. Harrison has an area in her garage (background) that’s used to store groceries she stocks up on when sales are good.

Bullock, 38, says her savings in the first six months of this year will pay for a Walt Disney World vacation for her family. She’s a stay-at-home mom to Ethan, 6, and Gavin, 3, and wife to David.

Harrison, 36, is a CPA, and says her savings have allowed her to maintain her family’s lifestyle after reducing her work schedule. She now works part-time so she can be with son Ryan, 2, and husband Dwayne more often.

“I had always clipped coupons on a casual level,” Harrison says. “A year ago, there was a triples event at Lowe’s Foods and I scored $125 worth for $25 and thought I’d done great. But then I talked to another couple who’d gotten $250 (worth) for $25 and I thought ‘Holy cow!'”

That’s when she started devoting more time to planning her coupon use.

Bullock says she’s always been frugal but got extra serious about coupons after her boys were born and she stopped working outside the home.

They both started reading Internet coupon forums for tips and to get links to printable manufacturer’s coupons. They also began paying more attention to store circulars and started tracking prices on items their families use most.

They estimate that extra time and mindfulness have doubled their savings.

“One great deal I got recently was at Lowe’s Foods when they had cereal buyone get-one-free,” Harrison says. “I had four coupons for 70 cents off, so for four boxes of Kellogg’s cereal, I paid a total of 95 cents. And the register spit out a coupon for $10 off my next shopping order, which I knew would happen because I read it on an online forum. So, in effect, they were paying me to shop there.”

Both women buy multiple copies of their newspaper to get extra coupon inserts and participate in a free, local online coupon swap (at CharlotteMommies.com). They also organize their coupons in three-ring binders, tucking them into the pockets on clear plastic baseball card pages.

“I have them all sorted by categories and divided by different color tabs so I can flip to them easily” in the store, Bullock says.

Their actual grocery shopping takes the least amount of time, though both visit at least two stores every week. (They each bring a cooler to store perishable items in their cars.)

“I don’t spend much time in each store since I do most of my planning at home and my shopping list is made out before I leave the house,” Bullock says.

Along the way, they’ve learned the importance of knowing each store’s coupon policies.

Some have strict rules about Internet printable coupons, and others will double coupons worth up to 99 cents only. It also pays to know which stores allow “stacking,” coupon-speak for using a manufacturer’s coupon along with a store coupon on the same item. See store Web sites for policies.

Both women say shoppers should pay great attention to what the regular price for individual items is at different stores.

“Just because you have a coupon or it’s on sale doesn’t mean it’s a good deal,” Harrison says. “A sale can mean just 10 cents off, and it might be smarter to save your coupons. Items tend to hit their lowest price about every 12 weeks. You should always try to combine a sale with a coupon to get the biggest savings.”

Harrison says she’s learned to be creative about where she gets her coupons.

“Go through your cupboard and figure out what you buy and use on a weekly basis,” she says. “Contact those manufacturers, compliment their products and ask for coupons.”

And where beer and wine is sold at grocery stores, she suggests checking for tear-pad coupons near the beverages. She often finds savings on meat and seafood there.

Bullock and Harrison say they follow the rules – they don’t try to use expired coupons or ask stores to bend their policies.

“If it’s a really good sale, then I try to go just every few days so I don’t take all of the items from the regular customers,” Bullock says. “Never clear a shelf! That to me is bad coupon karma and greedy.”