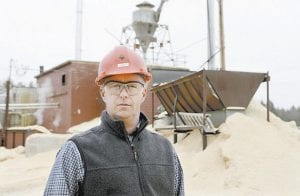 SOARING SAWDUST – Mike Shane poses by machinery that funnels sawdust to a furnace for heating at a sawmill in Casco, Maine. Once considered a waste product, the price of sawdust has soared with development of alternative uses such as wood pellets and particle board. (AP Photo/Joel Page)

As huge saws rip through logs at the Hancock Lumber sawmill, sawdust flies through the air and coats equipment, floors and rafters. Far from a nuisance, though, the sawdust is commanding premium prices as housing construction slumps and energy costs grow.

From Maine to Oregon, the price of sawdust, along with other wood byproducts, has soared.

When they can find it, sawdust buyers – dairy farmers, particleboard makers, wood pellet manufacturers among them – are paying up to $50 a ton or more. That’s double what they paid a year ago, some say.

There was once a time when sawmill operators could barely give away their sawdust. They dumped it in the woods, buried it or incinerated it just to get rid the stuff. These days, they have ready markets for sawdust, as well as bark, wood chips and board trimmings that can’t be sold as lumber.

“Now the only things in a sawmill that aren’t salable are the whine of the saw blade and the steam from the kiln,” said Peter Lammert, a forester for the Maine Department of Conservation who has tracked the industry for decades.

At the Hancock Lumber sawmill in this small town west of Portland, logging trucks arrive daily loaded with eastern white pine logs. As they go through the mill, the logs are debarked, cut, sized, planed, graded and sorted as they are transformed into lumber.

Along the way, sawdust and wood chips fly through the air. Much of it falls through grated metal walkways and onto a maze-like system of conveyor belts that carry and separate all of the leftover wood byproducts, all of which is sold for different purposes. The bark becomes mulch for landscaping; the shavings are used for animal bedding; larger scrap pieces are used in biomass power plants.

The bulk of the byproduct is sawdust, which is eventually blown through a metal pipe and into a nearby storage shed. On a recent day, the shed was filled with a 20-foot-high mountain of sawdust that sawmill manager Mike Shane estimated weighed about 150 tons.

In the cold months, the mill uses the sawdust to power its own furnace for heat and to run its kilns that dry the lumber. But when the weather warms up, it sells its supply to dairy farmers for animal bedding and to plants that manufacture wood pellets that are burned in wood stoves and furnaces.

The numbers tell the story of what’s going on.

At the same time, wood pellet plants are popping up in need of raw supply, thereby increasing the demand, he said.

“The result, not surprisingly, is higher prices,” Spelter said.

In the Northeast, the tight supply has forced some dairy farmers to travel hundreds of miles to get sawdust for animal bedding. Many farmers are turning to sand, shredded newspaper or other materials.

Even Ralph Caldwell, who owns 400 dairy and beef cows at his Caldwell Farms in Turner, has changed from sawdust to sand for bedding – even though he’s also a sawdust distributor, buying from sawmills and selling to other farmers.

In the past year, a trailer load of sawdust has gone from $800 to $1,400, he said. He gets calls from New Hampshire and Vermont farmers who are paying $300 or $400 more than that, and some tell him they can’t even find sawdust.

Caldwell blames the tight supply and high prices on what he calls “failed” energy and trade policies at the federal level. Energy policies have resulted in sky-high oil prices, causing people to turn to sawdust for heat and power, he said. Trade policies have driven furniture and wood product manufacturers offshore, resulting in less sawdust on the market, he added.

“It’s political. And the politicians don’t have a clue to what they’re doing,” he said.

Sawdust is the biggest expense for wood pellet manufacturers, who are seeing demand go up from consumers seeking alternatives to oil to burn in their furnaces. Corinth Wood Pellets LLC in Corinth now pays close to $50 a ton for sawdust, said George Soffron, director of operations.

That’s up from around $40 a ton not long ago and can add up quickly when buying hundreds of tons a day, he said. But he doesn’t expect the prices to stay high forever.

“When the housing market comes back and the price of lumber goes up, the price of sawdust should go down,” he said.

The high price is perhaps the one silver lining that sawmills are experiencing in a down market. Hundreds of sawmills nationally have cut back production or shut down as lumber demand and prices have tanked.

In February, sawmills on average were getting $243 per thousand board feet of construction lumber, Spelter said, citing industry reports. That’s down 15 percent in the past year and 35 percent from two years ago.

But at least the mills can earn back a little something from the higher prices for sawdust and other wood byproducts. Jimmy Robbins II of Robbins Lumber in Searsmont said it’s gotten to the point where wood shavings, which are popular with horse farms, are worth more than the lumber.

“We use every part of the tree. Everything is consumed,” Robbins said. “It’s become so valuable you can’t afford to not sell everything.”