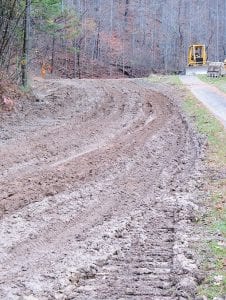 Letter writer Jerry Collins took this photograph of a lot at Fishpond Lake which was formerly occupied by a tennis court. County officials say EQT is building a recreational vehicle park on the location.

The summer of ’67 was a glorious time to live.

I was goofing off the summer, having been drafted. Fishpond Lake was about finished and had backed up over the original fish pond, built by the Crafts who lived there. Fish were everywhere and I swam, fished and camped there a lot that summer.

After the Army, I returned to find sandy beaches, floats and dressing rooms at the lake, built by some youth group. Swimming was part of my rehab. I’d accumulated a lot of shrapnel and backpacking was difficult. I discovered canoes about that time and could paddle better than hike. Canoes were perfect for Fishpond. It was full of crappie, bass and catfish. Later trout were secretly stocked there, and it didn’t take me long to run into them.

Two beavers came there, but someone killed them. It was the first I’d ever seen. I saw my first wild turkey there, too. The sound of bullfrogs and whippoorwills dominated the nights.

Soon after, County Judge Robert Collins closed the lake, and only a privileged few could use it. Public outcry soon reopened it, but it deteriorated rapidly after that. Vandals destroyed and hauled away everything there. Garbage was dumped over every hillside.

During Judge Collins and Judge Ruben Watts administrations, hundreds of thousands of dollars were wasted on unfinished water and sewer lines, on 1-inch thick blacktop and $50,000 toilets.

Fortunately, some Jenkins Club (I think the Jaycees) took it upon themselves to hand clean it. Thousands of man hours were spent, but it was cleaned and has remained so until the present.

An attempt to strip mine the property surrounding the lake was thwarted by public outcry and Beth-Elkhorn Coal Corp. officials. Gas drilling was partially stopped, but not until after several wells and pipelines were put in, destroying thousands of trees and scalping dozens of acres of pristine forest. Much of the timber was stolen, and much lies there now, just rotting.

Thankfully no wells were drilled in the watershed, but oil was spilled in the small lake near the entrance. Equitable Resources put up gates to hide the destruction there. I cut them open.

I tried desperately to get the Kentucky State Parks Department to take it over, but the county fought hard to keep it. Andy Wright, a colorful old gentleman, was hired to oversee it, and it slowly started showing recovery. Andy knew everyone who came there and had the latest fishing tips. I spent many hours gossiping on his front porch. I built a fishing dock there that lasted many years.

When Carroll Smith became judge, I figured Andy would go, but he stayed on until he was too old to keep up the pace. During those years, the area improved dramatically and reunions, club meetings and church outings booked the facilities often.

Judge Smith kept the oil companies from running “roughshod” over the lake (and the rest of the county) for years. When Equitable spent many thousands of dollars to buy the office of current Judge Jim Ward, I figured the gas companies would be back to their old tricks, but never as bad as it is now.

I looked at the area on Google Earth recently and found Fishpond to be a little green jewel in the middle of rampant destruction. Strip mining, mountain-top removal, gas wells and lines scar everything around it. I wonder why the gas company needs a hundred-foot wide swath to bury a 10-inch pipe.

Why don’t they replant the trees or grass? The grass they plant dies in less than a year, and the erosion begins. Three times oil companies have spilled oil into local water supplies without an arrest, fine, or lawsuit. Why??

Last week I went to walk my dog in the little wilderness area above the tennis court. It was gone! The tennis court, the parking lot, the road, all under mud.

There appeared to be strip mining above there. Bulldozers were sitting where the tennis court had been. There were no silt ponds, no silt fences or hay bales protecting the lake. Immediately I went to Judge Ward’s office, but he wouldn’t see me.

One of his flunkies came out and told me, essentially, “Oh happy day. Equitable is building us a trailer court in the head of the hollow.”

I will probably never go there again. It hurts to see something so intertwined with your life destroyed by greedy opportunists and politicians.
JERRY COLLINS
Millstone