Says new blacktop should have reached to highway 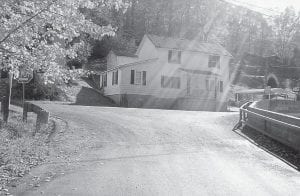 Letter writer Linda Gallion is angry because paving work on Joe’s Branch near Burdine ended a few feet before the road’s junction with KY 805.

On October 24, a blacktop crew moved in front of our house at No. 3 in Jenkins and said they were going to blacktop Camden, Joe’s Branch and down the back road across the bridge and up to the main highway, KY 805 (Old U.S. 23). They did all the road until they crossed the bridge, then did halfway up the hill and shut down.

I went out to ask the boss why they were shutting down the job. He looked at me and said, “That man across the road.” I looked and there stood Magistrate Wayne Fleming. So I said, “That man?” and he said yes. So I called G.C. Kincer, the mayor, who later came down with City Manager Todd DePriest and told us Wayne Fleming had shut it off in front of our home. Magistrate Fleming doesn’t like me because I told the truth a while back about the water in Joe’s Branch.

In the year 2000, my brother Bobby Ray Mullins lived in Joe’s Branch where my mother and father raised all of us kids, nine in all. Bobby Ray got real sick — cancer on his spine, cancer of the colon — and couldn’t go up on the hill to keep the water coming down to his home as well as to my niece who lives up there. In the 1940s and 1950s, there was a mine on our farm, so when they shut it down my Dad kept the water coming down to our house as well as my brother’s home in the bottom.

I started calling Hal Rogers in 2000 to see if he could help me to get water in Joe’s Branch because some of the other families needed water too. I told him of all the coal that came out of our mountains, Joe’s Branch got nothing. I also asked Wayne Fleming, former Letcher County Judge/Executive Carroll Smith and then-Mayor Robert Shubert if they could help me. I did not know the water for Joe’s Branch had been put in the budget for the year 2002.

Mayor Shubert of Jenkins requested that responsibility for the Joe’s Branch waterline extension be transferred to Jenkins because preliminary engineering work for the project had been completed by the city. What happened between 2002 to 2003? I know he asked for the water because I searched the records. Wayne Fleming told me in November 2006 while going in to vote at Burdine School, “We are going to get the water for Payne Gap and then bring it down to Joe’s Branch.” So I said, “No you won’t.”

In January 2007, I went to the Jenkins City Council meeting. Jim Ward had just won Letcher County judge/executive and Charlie Dixon had won mayor of Jenkins. So I asked Charlie if he would help me get the water to Joe’s Branch. Engineer Paul Nesbitt stood up and looked at me and said, “Mrs. Gallion, the water has been in the budget at the fiscal court since 2002 and if not used by August 2007 the money would go back to the state.” So Jim Ward, Charlie Dixon and the council went to get the water put in Joe’s Branch. When it came up to be voted on at the fiscal court, Wayne Fleming, who represents the Jenkins area, said he preferred holding the project until the sewer could be offered in the area as well. It was just another way to stop the water, but KRADD representatives and Judge Ward encourage the court to approve the project as they didn’t have time to add sewer lines to the extension at the same time.

The reason I’m putting this letter in The Mountain Eagle is to let everyone know Wayne Fleming did not get the water in Joe’s Branch. He tried to block it every time it came up. Also, he discriminated against us as citizens of Jenkins. We were born in No. 3 Jenkins, lived and worked here, own our home here, pay taxes, raised our five children here — three boys and two girls, 12 grandkids, 15 great-grandkids. My husband Charles Gallion and his brothers Carl Gallion and Thurman Gallion served in World War II. Rodney and Douglas served in the Korean War. My brother Johnny Mullins served in World War II. My brother James “Red” Mullins served 23 years in the Air Force, also 20 years in civil service. Bobby Ray, my brother who I was getting the water in Joe’s Branch for, served in the Air Force in Africa. He died March 17, 2007.

I want to thank everyone who helped me with the water and appreciate all our friends who stood with us through the seven years I worked to get the water in Joe’s Branch.