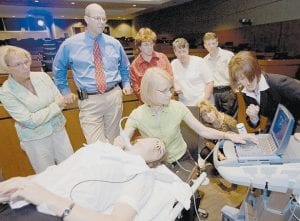 NEW TEST – Joan Anderson, center, a nurse practitioner, gets training using an ultrasound scanner in Madison, Wisconsin. The equipment is used by medical professionals to check whether a patient has heart disease, which might be detected in neck arteries. The new, smaller machines are starting to make their way into ordinary doctors’ offices where they may someday be as common as stethoscopes and EKGs. (AP Photo/Andy Manis)

What if your doctor could swipe a wand over your neck and reveal whether you have hidden heart disease?

That is now possible in places other than the sickbay of the starship Enterprise.

Miniature ultrasound machines are starting to make their way into ordinary doctors’ offices, where they may someday be as common as stethoscopes and EKGs. A Pennsylvania company’s pocket-sized one weighing less than 2 pounds hit the market recently.

Some of these devices can make images of neck arteries, which offer a “window” to heart arteries that cannot easily be seen. If the neck vessels are clogged, doctors know that those around the heart probably are, too, and that treatment or more testing is needed.

The new ultrasound machines offer a relatively cheap, painless way to screen people with no symptoms of heart problems for signs of hidden trouble.

Is that a good thing?

Many doctors say yes, because for one-third of heart disease sufferers, the first symptom is dropping dead of a heart attack. Finding these people early and treating them could save lives. The test may be especially good for women, who often have few traditional signs.

Lisa Rosenstock of Madison, Wis., is an example. At age 41, this trim, athletic mom had normal cholesterol and blood pressure but a troubling family history of heart attacks. Ultrasound revealed a big clog in the main artery from her heart to her head.

Her cardiologist, Dr. James Stein of the University of Wisconsin Madison, put her on medicines to lower her risk of a heart attack or stroke. He also is leading a study aimed at making ultrasound testing more common.

“There’s a great need for a noninvasive and safe way to identify people who don’t have signs but have risk” of heart disease, he said.

But there are potential downsides. The mini machines will put this testing into the hands of a lot more people than those with extensive training to do it. Suddenly, small-town family doctors could be seeing scary-looking artery buildups and may rush to treat some that may never threaten a patient’s life.

Patients, too, will see these pictures. Some may be motivated to quit smoking, lose weight or go on cholesterol-lowering statin drugs. But many also may be treated unnecessarily, and have side effects from that.

Ultrasounds also are being advertised directly to consumers – the latest “peace of mind” test like whole-body CT scans and MRIs for those rich and worried enough to pay hundreds of dollars for them.

Some drugmakers are helping promote ultrasound testing, because it could lead to more people taking cholesterol pills. Last year, a group of doctors and imaging experts called for wider

screening. Their opinions were published as a supplement to the American Journal of Cardiology paid for by Pfizer Inc., which sells the statin Lipitor.

British-based AstraZeneca PLC is seeking federal approval to expand marketing of its statin, Crestor, based on ultrasound testing that showed the drug could prevent artery buildups from getting worse.

The American Heart Association and other major cardiology groups say that ultrasound testing with big, conventional machines can help doctors determine heart risk in certain patients. But they do not endorse widespread screening with the smaller devices because evidence of benefit is lacking.

Guidelines from several groups on who should use the small ultrasound devices and on which patients are expected next spring, said Stein, who heads a panel writing the advice.

On balance, many doctors see more promise than peril.

“It’s equivalent to a mammogram of the heart,” said Dr. Christopher Rembold, a cardiologist at the University of Virginia. If doctors see something suspicious, they can refer patients to specialists for more extensive tests before deciding whether or how to treat it, he said.

Screening involves checking for buildups called plaque and measuring the thickness of the wall of the main neck artery. Normal thickness varies by age, race and sex, and charts give doctors detailed guidance. Too-thick arteries are a sign of higher risk for heart attack.

Until recently, only ultrasound specialists did these tests, which were analyzed by a radiologist. That often meant patients needed another appointment at a hospital or ultrasound center, and a return trip to their primary doctor for results.

The new portable ultrasound devices are changing that. SonoSite Inc. of Bothell, Wash., came out with one in 1999, followed by GE Healthcare, based in suburban Milwaukee. They mostly are used in emergency rooms to check for problems with the heart’s valves or pumping capacity, or bulging abdominal arteries threatening to rupture.

But scanning neck arteries became more common after SonoSite’s MicroMaxx came out in 2005. The 8-pound device is a small laptop and costs $25,000, or about $40,000 with related software.

The pocket-sized device that went on sale last week – the $10,000 Acuson P10 – might eventually expand artery scanning even more. Siemens Medical Solutions, the Malvern, Pa.- based unit of the German company Siemens AG, initially will sell the device for traditional heart imaging and emergency use, but plans to offer artery imaging in the near future. The quality of the images will have to be proved for the device to gain wide acceptance, several experts said.

At UW-Madison, doctors have done neck scans with portable ultrasounds on about 900 patients. They charge $295, and three local HMOs agreed to pay. Most insurers do not, because of limited proof of the value of such tests.

Others are selling neck scanning directly to consumers.

Dr. Robert Bonow, cardiology chief at Northwestern University and a past heart association president, recently got an ad in the mail for screening at a shopping center near his Glencoe, Ill., home. He worries about the accuracy of such testing.

Suppose the scanning is 90 percent accurate, and the normal rate of heart disease is 10 percent, he said. That would mean 20 out of 200 people would have heart disease and 180 would not. But the scan would tell 18 people they had it when they didn’t, and would miss heart disease in 18 who did.

Because of the false alarms, “you may be treating twice as many people as you have to,” he said. “If you’re dealing with 2 million people, that’s a lot of people who don’t need treatment.”

Robert Rosner, an ultrasound technician in Fort Myers, Fla., sells screening to police, fire and other municipal workers and through doctor offices and health clubs. He charges $180 and offers a personal testimonial. At age 42, he scanned his own arteries and was surprised to see a 30 percent narrowing in one. A doctor put him on medications, and a couple years later, the plaque was gone.

“Without needles or radiation or pain … there’s disease in the body that can be reversed,” he said. “I’m living proof.”

UW’s Stein is leading a study to see whether family practice doctors can be trained in a weekend to accurately do the tests. SonoSite donated equipment, and a university-administered grant is paying for the study, which will test 350 patients.

“The danger of overtreating is low, especially in an environment where we dangerously undertreat risk factors,” Stein said. Screening itself can be good, he pointed out. A previous study found that even those whose arteries were found to be normal were motivated to exercise more.

It should do even more good for people who do have heart disease, said Dr. Sanford Carimi, a Janesville, Wis., physician participating in Stein’s study.

“If I tell you your cholesterol is 130, that won’t bother you,” he said. “If I show you you have a plaque in the blood vessel leading to your brain, you’re more likely to make some changes.”