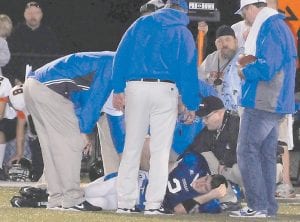 Letcher County Central High School football star Logan Johnson was being tended to in the third quarter of a game against Lawrence County at Ermine last Friday night. Johnson suffered a kidney tear after being hit hard even though he had called for a fair catch on a punt return. Johnson was hospitalized and later released, but is not expected to play anytime soon. (Photo by Chris Anderson)