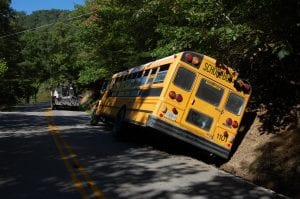 Four Cowan Elementary School students were taken to the Whitesburg hospital after a school bus went into a ditch around 3:30 p.m. today on Highway 588 at Ice.

Students ranging from kindergarteners to eighth graders were on bus 1101.