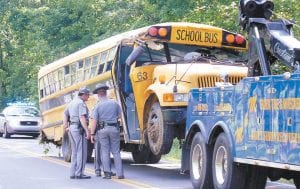 Kentucky State Police troopers gathered around a Carlisle County school bus that crashed Monday near the community of Cunningham, Ky. One child was killed in the crash, while several of the 29 children on board the bus were injured and taken to western Kentucky hospitals. (AP Photo/The Paducah Sun, Will Pinkston)

The Carlisle County school superintendent is praising what he calls the “heroic” efforts of teachers, staff and others to evacuate a school bus filled with children that swerved off a western Kentucky highway and rolled over several times, killing a 6-year-old boy and injuring several others.

Pupils from Carlisle County Elementary School were returning from a field trip when the bus crashed Monday afternoon.

Shoulders said grief counselors would be available for students and adults when school resumed Wednesday after a day off for Kentucky’s primary election.