School officials say threat had to be taken seriously 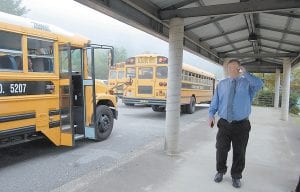 Letcher Schools Supt. Tony Sergent was in contact with other officials by cellular phone Monday morning while Letcher County Central High School students remained aboard buses on the campus of the old Whitesburg High School. Sergent said all threats of potential school violence must be checked out. (Photo by Sally Barto)

Officials say there was no actual bomb threat Monday morning even though students were kept away from the campus of Letcher County Central High School until police deemed the campus and building safe.

“The information we received indicated that an unidentified student might possibly bring a bomb to school (Monday),” LCCHS Principal Stephen Boggs said in a typed statement. “Immediately upon learning of the possible threat, buses that were en route to Letcher Central were diverted to the old Whitesburg High School campus and bomb threat precautionary procedures were implemented.”

Two students had been overheard by another student at school Friday talking about acquiring fire- crackers or other fireworks, Boggs said. The information was told to an adult over the weekend. Letcher County Public Schools Supt. Tony Sergent said he was notified of the comment at 6:35 a.m. on Sept. 9. The high school building normally opens for students at 7:10 a.m. and classes start at 8:25 a.m.

Sergent said he immediately called the bus garage to have school buses rerouted to the WHS campus. He then called police and district administrators.

All threats must be checked out, Sergent said.

“You have to be careful,” he said.

The district’s emergency plan that students be kept out of the building when such an incident occurs, said Sergent. Students already at the high school were loaded onto buses and taken to the WHS campus.

“We searched through every classroom and office in the high school and vocational school,” said Fields.

“Inspection of school facilities yielded no concern of a bomb’s presence,” said Boggs in letter to parents of LCCHS students. “After identifying and isolating those involved in the concerning conversation and after completing the inspection at the Letcher Central facilities and determining the school to be safe, students and faculty reported to the school for classes.”

Students were sent back to LCCHS around 10 a.m. Sergent said staff and students were able to practice procedures Monday.

“Please rest assured that security and safety are of utmost importance,” said Boggs. “Every precaution will be taken to keep all students, employees and our visitors safe at all times.”