Schools urged not to panic 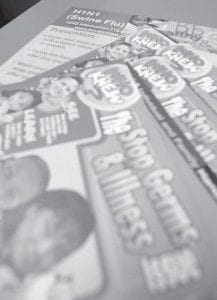 Flu prevention booklets will be distributed to many school districts. The U.S. government said schools should only close this fall if large numbers of students have swine flu. (AP Photo)

The government is urging school officials to stay calm when swine flu strikes this fall, closing buildings only in drastic cases and allowing sick students to return as soon as 24 hours after their fever is gone.

States and schools should also be planning now for the possibility of schoolwide vaccinations beginning in mid-October.

Federal officials know more now about swine flu than they did last spring, when alarm and confusion led hundreds of schools to temporarily shut down. New guidance issued Friday reflects what the officials have learned.

Closing schools is rarely warranted, even if students or teachers have swine flu, said Thomas Frieden, director of the Centers for Disease Control and Prevention.

“There are measures we can take to protect the students, to protect the staff and allow learning to continue,” Frieden said during a news conference at the Department of Health and Human Services.

Some steps for prevention remain the same as always, officials said: People should wash their hands, cough into their sleeves and stay home if they get sick.

But the officials added a new precaution, saying schools need to keep sick kids away from classmates, setting aside a room where students who show up sick can wait to be sent home.

And CDC also changed its advice on how long sick kids should stay home. Students and teachers can return to school or work 24 hours after their fever is gone; the old advice was to stay home for a week.

There are three situations generally that would justify school closure, officials said:

— When swine flu emerges in a school where most or all of the children have special needs, such as a school for pregnant teenagers or for medically frail children.

— When large numbers of kids or staff come down with swine flu.

— When parents send sick, feverish kids to school despite federal and local guidance to keep them home.

The last scenario — sick kids with fever coming to school — prompted dozens of New York City schools to close last spring, said Frieden, who was serving as the city’s top health official at the time.

“Perhaps we would have closed fewer, had we known then what we know now,” he said.

As with most decisions about education in the U.S., whether to close schools is up to local officials. But those officials have been looking to the federal government for advice about the new flu strain that has caused a global epidemic.

The emergence of the never-before-seen flu prompted more than 700 schools to temporarily close last spring, giving students an unexpected vacation but forcing parents to scramble to find child care.

The CDC had at first said schools should shut down for about two weeks if there were suspected cases of swine flu. Then the CDC changed course, saying schools did not need to close because the virus was milder than feared. Instead, parents were told to keep sick kids home for at least a week.

The benefits must be balanced against loss of learning, lost wages for parents, lack of access to school breakfast and lunch programs for poor children and the danger of kids being left unsupervised, officials said.

Also up to local officials is whether and where to do mass vaccinations. Federal officials hope schools will play a major role in providing vaccinations, which public health experts consider to be the strongest defense against infection.

Duncan said he met Aug. 6 with groups representing teachers, principals, school boards, nurses and counselors, and that there was universal support for schoolbased vaccinations.

“Children are obviously at risk here,” Duncan said. “Schools want to be part of the solution. It’s a natural location. It’s where our students are.”