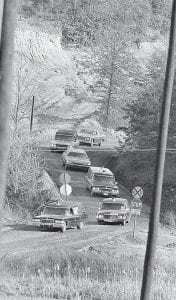 A line of hearses carrying the bodies of miners killed in an explosion at the Scotia Mine in March 1976 wound its way down a mountain road after the bodies were recovered from the Oven Fork mine more than eight months later. (AP Photo)