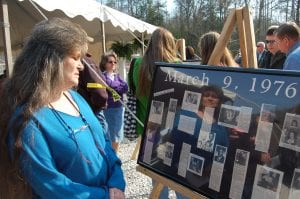 Rose Kelley, of Cincinnati, Ohio, looked at old newspaper clippings on March 9 detailing information about those who died during the Scotia mine disaster which occurred 34 years ago. Kelley’s brother, Kenneth “Doyle” Turner, and her cousin, Willie D. Turner, both died as a result of the first mine explosion on March 9, 1976. Kelley’s father, Grant Turner, was working in the mines that day but survived. Her brother, Claude Turner, was on the recovery operation for the second explosion. 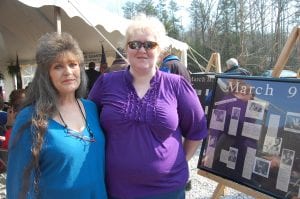 Rose Kelley (left) posed for a photograph with her niece, Lori Brown. Brown’s father, Kenneth “Doyle” Turner died as a result of the mine explosion on March 9, 1976. 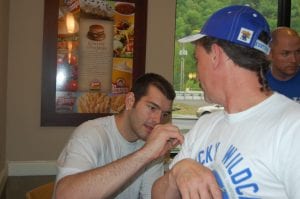 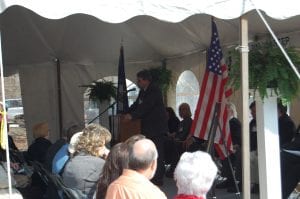 L.M. “Mike” Caudill, chief executive officer of Mountain Comprehensive Health Corporation, spoke to an estimated crowd of about 300 people on March 9 during a ceremony for those who died during the two mine explosions. Respiratory Clinics of Eastern Kentucky and its parent company, MCHC, submitted an application to the Kentucky Historical Society for an historical marker in honor of those who died in the Scotia mine disaster. 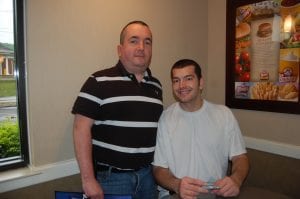 Bridgette Holbrook and Misty Delph attended the ceremony on March 9 at Oven Fork to honor their father, Robert Griffith who died during the first mine explosion. Holbrook was three years old at the time of the disaster and her mother, Madonna, was pregnant with Delph. 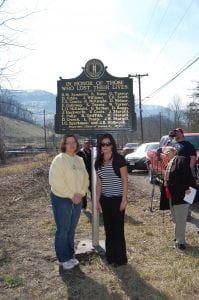 Misty Delph and Bridgette Holbrook posed for a photo on March 9 in front of an historic marker which was erected on Tuesday in honor of those who died in the Scotia mine disaster. Holbrook was three years old at the time of the explosion and her mother, Madonna, was pregnant with Delph. 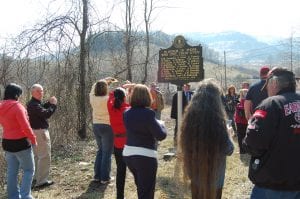 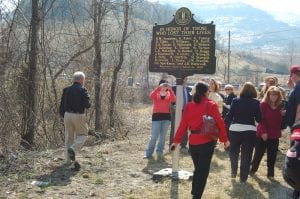 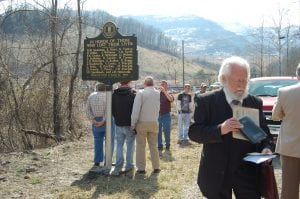 Rev. Wade M. Hughes held a diary he wrote in March 1976. He kept accounts of what he saw as he consoled family members after the two mine explosions. Hughes was asked to notify families when there were no more survivors. 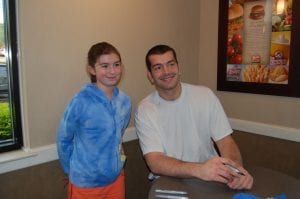 Miaty Delph showed Rev. Wade M. Hughes where he had written her father Robert Griffith’s name after he had died during a mine explosion. 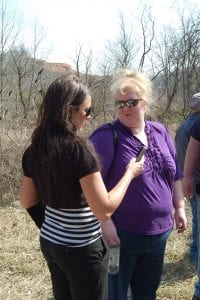 Bridgette Holbrook and Lori Brown, who were both young children when their fathers died during the mine explosion on March 9, 1976 recently exchanged phone numbers so they can keep in touch. 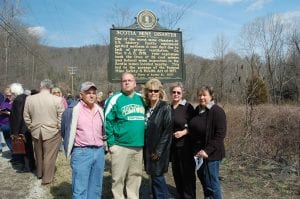 Family members of Dennis C. Boggs posed for a photograph in front of an historical marker honoring those who died in the Scotia mine disaster. Boggs died in the first explosion on March 9, 1976. Pictured from left are Dennis C. Boggs’s brother Everett Boggs, his son Dennis Boggs, his wife Jennifer Boggs Fuller, his sister Iva Stidham and his sister Kaye Cantrell.