Sculpture to be unveiled in Whitesburg this week 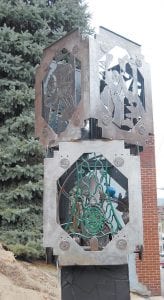 A new metal sculpture created by Kentucky Heritage artist Doug Adams will be unveiled this weekend during the City of Whitesburg’s Fall Artwalk.

David Narramore, chairman of the Letcher County Tourism and Convention Commission, said Adams’s sculpture entitled “Appalachian Balance” will be unveiled at 4 p.m. on Oct. 16 in front of the old Whitesburg Post Office, which now houses the tourism commission.

Narramore said the Letcher County Fiscal Court and the tourism commission is paying $1,200 to commission two sculptures by Adams, a Letcher County native and art instructor at Letcher County Central High School. The second sculpture will be located on the triangle median near the Asher law building known to many as the old Paschal Fields Service Station.

“Appalachian Balance” will consist of three building blocks, with the darkened steel base representing coal, which has been the foundation of Letcher County’s economy since the early 1900s. The bottom cube contains tools and objects of antiquity to represent the culture and heritage of the area.

Narramore said the second cube is symbolic to the work and creativity of the people of eastern Kentucky. Mirrored tiles will be placed behind the panels to reflect sunlight.

The third cube, said Narramore, will showcase the “Blue Moon of Kentucky.” Timber, wildlife, ducks, elk, turkeys and bears can be seen on this portion of the sculpture. A figure representing a man playing a banjo and riding a unicycle will be displayed on a pivot system so that it can rotate.

Ravens will be represented on the very top of the piece, said Narramore, because their only natural habitat for nesting in Kentucky is on the ridge of Pine Mountain.

“I definitely think it will be a plus for the town and will help draw people into the area,” said Narramore.