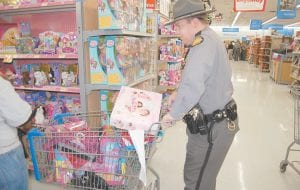 COPS SHOP WITH KIDS — Kentucky State Police Trooper Justin Cornett pushed a cart full of toys during the Shop with a Trooper event held at Walmart here December 7. Eighty-three children in the KSP Post 13 area shopped with troopers, dispatchers, detectives, Walmart employees, local politicians and community volunteers. About $125 was spent on each child.

The local Sears store Mayking has announced it will make an automatic contribution to Letcher County Central High School and additional contributions will be available to the school through a Tip Off Tuesday coupon offer.

Through the offer, fans attending Letcher Central High School athletic events will receive a coupon valid fora5percentdiscounton Tuesdays at the store now through January 29. Sears will give the school 5 percent of the purchased amount.

The store is owned and operated by Kelvin Eldridge. 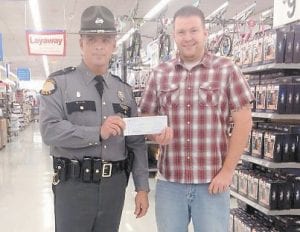 DONATING TO THE CAUSE — At the Shop with a Trooper event at Whitesburg Walmart, Lee Michael Caudill presented a check to KSP Trooper Clayton Stamper for $1,700, which was 100 percent of the profit from the Mountain Heritage truck show. Each year Caudill donates all of the money raised from that event to Shop with a Trooper.