Season is winding down 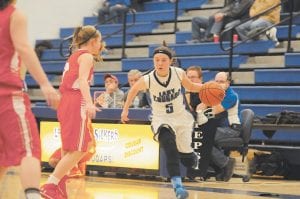 LADY COUGARS WIN — Letcher Central’s Cheyanne Stidham drove the ball downcourt past a Belfy defender in the Lady Cougars’ 68-14 rout of the visiting Lady Pirates on Monday. Stidham was one of a dozen Lady Cougars to score in the game and led all scorers with 14 points. Stidham’s teammate Courtney Brock also scored in double figures, dropping in 10 points. (Photo by Chris Anderson)

The Letcher Central Lady Cougars were scheduled to enter the final week of the regular season with Wednesday night’s visit to Perry County Central.

The 15-6 Lady Commodores are the top-ranked team in the 14th Region.

LCCHS is on the verge of yet another 20-win season and has a legitimate shot at successfully defending its regional crown despite losing four starters off last year’s 29-6 team.

LCCHS scored the first 21 points to open the game and never looked back in picking up the easy win over visiting Belfry Feb. 10.

Kelli Quillen, who had four of the first-quarter steals, made a pair of free throws with 5:25 left in the third quarter, giving LCCHS a 42-6 lead and forcing a continuously running clock the rest of the game.

Stidham finished with a game-high 23 points and Meade wound up with 20.

The visiting Lady Cougars placed three players in double figures and appeared on their way to an easy win at Hazard Feb. 6, before hitting a scoring drought that allowed the Lady Bulldogs to rally and to close within 41-31 heading into the final quarter.

LCCHS led 18-9 after the first quarter and 32-20 at the half. The Lady Cougars built their lead to 40-24 late in the third quarter, but then stopped playing, according to coach Dickie Adams. “We just quit playing and that allowed them (the Lady Bulldogs) to outscore us 16-1 and make the game close at the end. I don’t know any other way to explain it; we just quit playing.”

Down the stretch, the Lady Cougars’ Kristin Bentley scored five of her seven points and LCCHS was able to close out the victory.

Thirteen of the 14 players that dressed in Senior Night Feb. 5 at LCCHS scored in the Lady Cougars’ easy 84- 36 victory over the visiting Lady Lions.

The only player to not score was junior forward Kristina Bentley, who saw only first-quarter action.

Asha Gonzales led the Lady Lions with a gamehigh 21 points — including five treys.