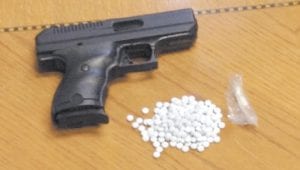 Police say this handgun, 126 tablets of oxycodone and two grams of cocaine were recovered.

A Perry County man was arrested Friday after police say 181 oxycodone tablets and two grams of cocaine were found hidden inside a sports utility vehicle at Isom.

Anthony Scott Couch, 39, of 90 Couch Drive, Vicco, was one of three passengers in a white 2007 General Motors Envoy that was pulled over at 2:58 p.m. on October 17 by Lt. Brian Damron of the Letcher County Sheriff ’s Department. Damron said he conducted the traffic stop because of a seat belt violation.

Damron said 126 oxycodone 30 milligram tablets were in an unmarked container and 55 oxycodone 30 milligram tablets were in a marked container. Two white tablets believed to be methadone and a gun were also located in the vehicle, Damron said. Police found what appeared to be cocaine inside Couch’s Mountain Dew bottle, according to information from an arrest citation.

Damron estimated the street value of the oxycodone to be $5,500 and the cocaine to be worth $200.

Couch is lodged in the Letcher County Jail. He is charged with first-degree possession of a controlled substance and possession of drug paraphernalia.

Occupants inside the vehicle were from an area that has been heavily targeted for its high volume of drug trafficking in Perry County, Damron said.

More arrests are expected. Information from the case will be presented to the Letcher County Grand Jury.