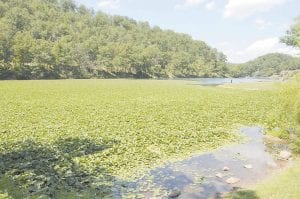 UNDER THREAT AGAIN – Water lilies have grown to the point they now cover more than threefourths of Elkhorn Lake, the Jenkins city water reservoir built in 1912. Jenkins Mayor Charles Dixon is looking for help to dredge the lake to remove the lilies, silt and other debris which have accumulated over the years. Dixon said the lake now provides water to 900 customers on the Jenkins Water System and is also being counted on in the future to supply water to the Payne Gap area. A second drought in as many years is also threatening the lake. “The city faced a water problem last summer and fall because of the drought,” Dixon said. “If only a portion of the lake was dredged there would be plenty of water” to get through other droughts. (Photo by Chris Anderson)

Letcher County is in the beginning stages of its second drought in as many summers.

Schoettmer said Letcher County is an inch below normal for the amount of rain it should receive in June. So far this month, the county has had 2.47 inches of rain.

Schoettmer said Letcher County ended 2007 about 10 inches below the normal amount, which is 40 to 45 inches. Letcher County had 30 to 35 inches of rain.