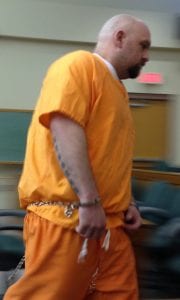 James Ray Maggard, the Neon man accused of murdering Dradrick “Drad” Fleming in June 2012, entered an “Alford guilty plea” in Letcher Circuit Court today (Friday) that will protect him from the possibility of being sentenced to death by lethal injection.

By entering the Alford plea, which originated in a North Carolina murder case in 1970, the 34-year-old Maggard maintains that he is innocent of the murder, kidnapping and arson charges against him, but admits that enough evidence exists that a jury could find him guilty of attacking Fleming with a baseball bat at Millstone and then burning Fleming to death after he set Fleming’s truck afire at a remote location on Black Mountain, near Franks Creek at Eolia.

The plea agreement, which calls for Maggard to serve life in prison without the possibility of probation or parole, was signed at Friday’s hearing by Maggard, his attorneys William Lewis Collins and Richard Counts, Letcher Commonwealth’s Attorney Edison G. Banks II and Fleming’s mother, Cathy Bentley. Maggard will not be required to testify against any other defendant charged in the case.

On March 5, Drad Fleming’s wife and Maggard’s lover, Stephanie Yvonne Jones Fleming, 32, of Millstone, pleaded guilty to her role in the murder. In return for her guilty plea, Mrs. Fleming will serve life in prison and and must testify against Maggard and a third suspect, Austin L. Ison, 25, of Pert Creek, who is also charged with complicity to murder, kidnapping and arson.

Maggard is to be sentenced on April 23. Ms. Fleming’s formal sentencing will be held on April 16.

Ison’s trial, which is not a death penalty case, is scheduled to begin on April 28 in Letcher Circuit Court.

Full coverage of Friday’s hearing will appear in the March 26 edition of The Mountain Eagle.