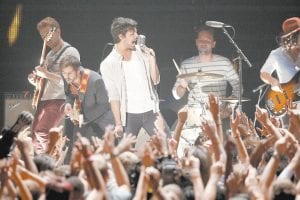 Fans of bands like Coldplay and Kings of Leon will like the indie rock group Young the Giant, one of several new and classic acts who can be seen free of charge at the Kentucky State Fair later this month.

The Kentucky State Fair’s free concert series will once again allow music fans to relive their glory days with classic hits and experience new and upcoming acts that are on the verge of super-stardom.

This year’s free concert line-up will allow fans to witness the next big thing with artists such as Jake Owen and Hot Chelle Rae and break out their 80’s aqua-net with Cinderella.

The following concerts are free with paid admission to the State Fair. All shows begin at 8 p.m. in Cardinal Stadium at the Kentucky Exposition Center. Gates open at approximately 6:30 p.m.

Bringing an alternative twist to the group is the band Young the Giant. This indie rock group released their self titled debut album in 2010. Their first two singles, “My Body” and “Cough Syrup”, reached the top five U.S. Alternative Song chart. Pop culture blog 411mania said, “Their influences are worn on their sleeves throughout, and the result is a sound that’s somewhat like a middle ground between Coldplay and latter-day Kings of Leon.”

Country music star Justin Moore can be noted for hits such as, “If Heaven Wasn’t So Far Away”, “How I Got to Be This Way”, and “Small Town USA”.

Jake Owen, who has made a name for himself in the Country music scene by touring with Kenny Chesney and Brad Paisley.

Cinderella will also be transporting fans back to the hair band days with their glam metal and blue-rock sounds. They have sold over 20 million albums.