Seismologist made the first 911 call after Utah mishap 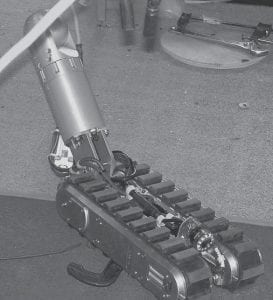 This photo released by the Department of Labor shows a robot being lowered through a bore hole and into the Crandall Canyon Minein Utah in an effort to locate six trapped miners. (AP Photo/Department of Labor)

A seismologist who detected ground tremors was the first to notify authorities of the cave-in that trapped six miners, even before mine officials called for an ambulance, according to 911 recordings.

University of Utah seismologist Walter Arabasz made his call about a potential problem at the Crandall Canyon mine early on Aug. 6, four minutes before mine officials made their call.

The 911 tapes obtained this week by The Associated Press showed that from the earliest moments scientists suspected the shaking came from a mine collapse, not a natural earthquake, as mine co-owner Bob Murray has maintained throughout the ordeal that has entered its fourth week.

“Just from the general character of the seismic event, it looks like it might be a coal-mining event,” Arabasz said on the tapes.

On Monday, bad weather delayed drilling on a seventh hole and also postponed plans to drop a $100,000 robotic camera into an earlier hole for a long-shot effort to locate the men.

“There’s a lot of rain,” Colin King, an attorney for the families, said after a briefing from federal mine safety officials. He said the road had been washed out in places.

As the saga entered a fourth week, Emery County authorities released tapes that described the early hours of the disaster.

“We had a big cave-in up here, and we are probably gonna need an ambulance. We’re not for sure yet because we haven’t heard from anybody in the section,” a voice identifying himself as Mark Toomer told a 911 dispatcher. “But we’re mostly likely going to need one up here.”

Arabasz told the dispatcher the seismic event registered as 4.0 magnitude at 2:48 a.m., and it was 3.1 miles west-southwest of the mine entrance. The severity of the event was later revised to 3.9 magnitude.

The six miners have not been heard from since the cave-in, which filled a mine shaft with rock and coal in the area where the men were working. No one knows whether the men survived the collapse.

Mine officials and federal regulators have worked unsuccessfully to locate the miners, drilling a half-dozen vertical holes into the mountain in hopes of finding signs of life.

Horizontal tunneling through the tons of debris inside was halted Aug. 16 after a second cave-in killed three rescuers, including a federal safety inspector, and injured six others.

It was unclear when drilling of the seventh hole would be finished. If the camera works, images were expected later Monday.

The camera is similar to one used to search the wreckage of the World Trade Center after the 2001 terrorist attacks in New York City. It can take images from about 50 feet away with the help of a 200-watt light. It can travel 1,000 feet and has some ability to move around the rubble.

It was not known for certain if the camera would fit into the narrow hole or move past rock and other debris before gaining access to the mine.

“There is no indication they are giving up,” King said of the rescuers. “I think they are genuinely anxious to see if this robotic camera gets some results for them, and they did put it down the hole enough to see this is going to work.”

Also Monday, the state’s new Mine Safety Commission met for the first time. Gov. Jon Huntsman told the panel that he wanted members to determine whether Utah should take over safety regulation of the state’s 13 coal mines. A report is expected in the fall.

Utah surrendered oversight of mine safety in 1977 to the federal government. At the time, Utah had only three safety inspectors for all its coal and hardmetal mines, said Democratic state Sen. Mike Dmitrich, a member of Huntsman’s panel.

In the nation’s capital, the chairman of the House Education and Labor Committee asked the mine’s operator for a host of documents about safety conditions. Rep. George Miller, a California Democrat, also asked Labor Secretary Elaine Chao for records relating to the Mine Safety and Health Administration’s oversight of the mine.

In the Senate, three Republicans, including Sen. Orrin Hatch of Utah, asked the Labor Department to investigate MSHA’s oversight of the mine.